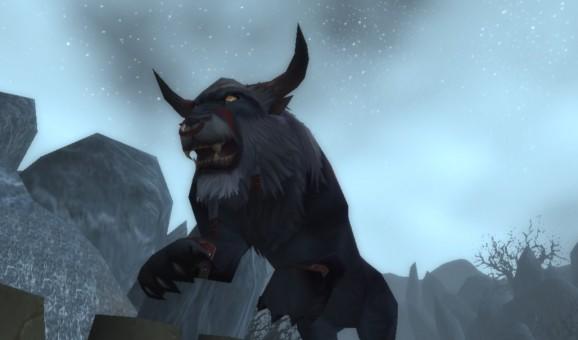 Every week, Shifting Perspectives explores issues affecting druids and those who group with them. This week, we invade the menagerie, shut down the demon factory, defang the beaten dog, carefully avoid Netherspite, play some chess, and face not only Malchezaar but the legions he commands.

Greetings, druids. This week we'll finish our look at stomping Kara from Curator through Prince. If you're looking for our first installment (covering Attumen through Nightbane), you'll find that here.

For most people, the Curator was the source of the first tier piece they ever got in Burning Crusade as he drops the tier 4 glove token. Note that the Defender tokens in tier 4 and 5 went to warriors, druids, and priests, which forced BC's more popular tanking and healing classes (in addition to the new legion of shadow priests that every raid wanted) to gear at each others' expense. It wasn't until tier 6 that Blizzard went for more sensible class combinations, splitting most tanking/healing classes to different tokens.

Trash clear: You can stealth past the mobs on the Master's Terrace and Broken Stair on your way up to the Curator, but budget a good 7-10 minutes thereafter to kill: a). both Arcane Watchman mobs (as they have Truesight), and: b). all the arcane pests in the room itself. Make sure you're pulling back to the very end of the room, or (ideally) through the doorway to avoid aggroing Curator as he paths up and down the hall.

Kill: Because the Curator takes 200% damage during Evocation -- which he should pop a little before 2 minutes into the fight -- you'll probably need less than 3 minutes to kill him. He'll probably die during the first Evocation or shortly thereafter.

Gear: Either bear or cat gear will do nicely.

How hard?: Not very -- tank him and spank him. The Astral Flares are an annoyance, but assuming you have Maul glyphed, it's easy to DPS them down without paying much attention.

Trash clear: Ugh. As old Kara hands already know, there's an army of trash between the Curator and Illhoof/Aran, and some of it can't be stealthed past (namely, the Arcane Watchmen and Arcane Protectors). You can successfully sneak by some of these by just edging around their patrol paths, but you're almost certainly going to be noticed at one point or another. Once you're past the robot mobs, however, you can stealth past the rest of the trash.

Gear: I would advise bear gear for this -- Illhoof still has a respectable amount of health, and the adds will slowly but surely chip away at your own HP.

How hard?: Not hard if you've got enough health (I would estimate 35K+) to survive the adds without worrying about cooldowns. The little adds have about 3K health each, so two Swipes will usually rid you of a few. You can leave Krik up (he has about 40K health), but because killing him is so easy with a glyphed Maul -- and because Illhoof takes additional damage when he's down -- I'd advise prioritizing him whenever he respawns. Berserk off the pull, get him down quickly, get a 5-stack of Lacerate running on Illhoof, and Swipe away at your leisure to kill both Illhoof and the little imps until Krik spawns again.


Shade of Aran was the first real trouble I encountered after the Opera event -- which, when you think about it, isn't really a big surprise. Opera and Aran are the two most interrupt-dependent bosses in the raid, and that spells trouble for druid soloers, However, unlike Opera, there's a way to cheese the Aran fight...if you've got a resto set.

Trash clear: Assuming you've killed or else stealthed past Illhoof trash, there's only one more room's worth of ethereal mobs between you and Aran. I usually kill them because it only takes a few seconds and they can be irritating to stealth past.

Kill: If you use the technique I do (described below), bank on a 7-9 minute kill. Aran isn't a quick fight.

Spec: Cat if you can for a little extra damage, but a bear spec works fine too. However, you must have 3/3 Predatory Strikes, and 2/2 Improved Leader of the Pack is extremely helpful.

How hard?: Ordinarily, Aran would be a nightmare for a solo druid. He's all about caster damage, and our interrupts suck. If you go full feral, he'll eventually whittle you down through your craptastic healing (and you will need to heal). To add insult to injury, he's adept at Counterspelling any cast you do within 10 yards of him, meaning you'll spend half the fight running out of range to get a substantial heal off. If you go full resto (I tried this after wiping multiple times as feral) without speccing into a little extra caster damage from the balance tree, odds are good you'll hit his enrage timer -- although I was hugely entertained to discover that it's possible to heal through his enrage for a fair bit, at least in ICC gear. And yet...blah. Nobody wants to spend 15 minutes on a boss.

If we can't interrupt him much and we can't otherwise kill him before his damage becomes an issue, it's necessary to play to the druid's other strength, which -- as any PvP druid can tell you -- is to outlast the bastard.

Here's how this works:

The beauty (or bane, depending on how you look at it) of the feral tree is that, in the absence of gear specifically tailored to the class' mechanics, an overwhelming portion of the bear and cat's effectiveness has to be baked into talents. Even in resto gear, you should be able to pump out 1,200 to 2,200 sustained DPS on Aran. That's more than enough to keep chipping away at his health while popping out frequently to heal. Just remember; focus on survival first and DPS second, and in due time he'll be a nice ghostly corpse at your feet. He's a little bit like Big Bad Wolf in that respect, without the massive irritation of the Wolf's stun.