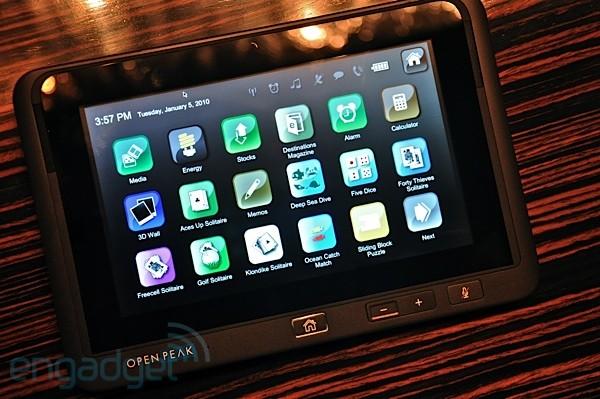 We've been hearing of OpenPeak devices for years, but the company is a little camera shy -- particularly because most of their products, like the Verizon Hub and O2 Joggler, are re-branded by carriers. However, the company seems to be getting behind its recently announced OpenTablet 7 in a big way, recently announcing a partnership with AT&T for data plans in the US. Neither party will confirm exact plan pricing, but we're getting the vibe that it will be "familiar" to folks who've seen iPad data pricing. The device itself is surprisingly well built -- not at all one of these dime-a-tablet jobs -- and the software is rather mature as well. OpenPeak claims to have "thousands of apps" for its platform that stretches across devices including phones, frames, and now a tablet, with a Linux-based platform with a Flash layer on top.

Refreshingly for the tablet space, the UI isn't a bit laggy, and seems pretty far along, though we're promised even more polish as this thing nears market. We didn't check out a browser, and some elements like the touchscreen keyboard are pretty dismal, but for home automation or video conferencing (the device packs a 1080p front-facing camera and a 5 megapixel shooter around back), it seems like OpenPeak can carve a niche for itself on the market. Most of all, we're impressed with the 1.9GHz Moorestown chip under the hood, which offers huge power savings over Atom; plenty of juice for some media rich apps, UI elements, and video; and even runs cool to the touch. An included docking station offers charging and port replication, but there's also an HDMI plug built right into the bottom of the tablet, along with removable microSD up top. No word on when exactly this will hit the market this year, how much it'll cost, or if it'll be rebranded by AT&T. Check out a video hands-on after the break, and a quick note on the press shots below: apps are subject to change based on the rebadger's own partnerships.

In this article: ctia, ctia 2010, Ctia2010, flash, hands-on, linux, moorestown, openpeak, opentablet, opentablet 7, Opentablet7, tablet
All products recommended by Engadget are selected by our editorial team, independent of our parent company. Some of our stories include affiliate links. If you buy something through one of these links, we may earn an affiliate commission.
Share
Tweet
Share