The Aethertech class will debut with Aion's Steel Cavalry expansion 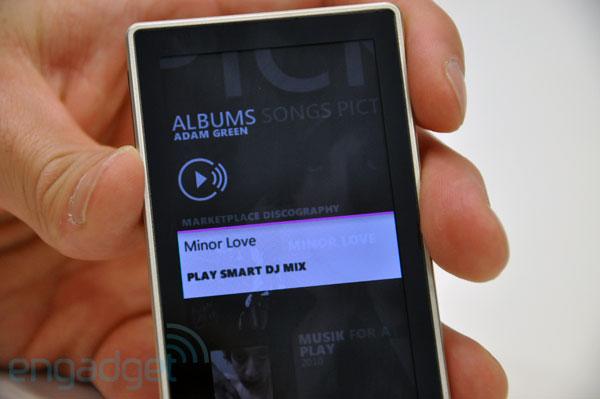 We know you've been waiting at the edge of your seat for that added codec support and SmartDJ for Zune HD, patient ever since its CES unveiling, and now we're here to assure you that it's coming with the next firmware update, version 4.5. We had a chance to preview both SmartDJ and Marketplace access via the AV dock connection this afternoon (video coming soon) -- the former being very smooth and easy-to-use, the latter being convenient except for having to input text using the simple remote and an on-screen keyboard. According to Marketing Manager Michael Yaeger, there's nothing in the cards right now for a new, more text input-friendly remote. While we had his attention, we also asked him about Mac support and international Zune HD releases -- neither of which he could answer definitively, but it doesn't sound hopeful in the near future. As for release date, we couldn't get anything more specific than within the next few weeks, but at least it's next on the docket. Press release after the break; so with that out of the way, how about some answers on that 64GB model, eh Microsoft?

Update: Now with a video demonstration, after the break.


Show full PR text
It's been an exciting few months for Zune. We launched the Zune HD device last September which has been receiving press and consumer praise for its OLED screen, HD Radio, HD video out and key music discovery features, which become even more powerful with a Zune Pass subscription. We also expanded the Zune service to additional platforms. We brought Zune video to Xbox LIVE in November, giving consumers access to instant on 1080p HD with 5.1 surround sound and the ability to buy content once and play it on the TV through Xbox LIVE, on the PC through the Zune software and on the go on a Zune device. We also announced last month that Zune will be an integrated feature on Windows Phone 7 Series and we're looking forward to sharing more details about the Zune experience on Windows Phones in the coming weeks and months.

Earlier this year, we also shared that we'll be introducing a Zune HD firmware update this spring. We're excited to be bringing even more features and functionality to Zune users through this update, and wanted to share some additional details around what will be introduced.

- Smart DJ on Zune HD: Zune has always been committed to helping people discover new music. We added "Smart DJ" to the Zune software last fall and now we're bringing this popular music discovery feature to the Zune HD device. Smart DJ on Zune HD will let you create an instant playlist mix whenever the inspiration strikes direct from your device. Just choose a song or artist from your collection or from the Zune Marketplace catalog and press the Smart DJ icon to build a new mix based on your selection. If you have a Zune Pass music subscription it will pull music from your existing collection and the Zune Marketplace catalog to create the mix. If you don't have a Zune Pass subscription you can still use Smart DJ to build a playlist from the collection on your device.

- Browse and Stream Music from Zune Marketplace on your TV: Using the Zune HD A/V dock, you can connect your Zune HD to your TV to play your favorite videos and music from your device on the big screen. With this software update, you'll also be able to browse and stream music from Zune Marketplace directly on your TV to find and listen to your favorite music from the comfort of your couch. You can browse New Releases, check out recommendations from your Picks page, search for a specific song or artist, or even create a new Smart DJ playlist on your big screen – a great way to make an instant soundtrack for your next party.

The update will be offered as a free download in the next few weeks, and we'll be sure to let you know when it's available. In the meantime, we wanted to share an image of the Smart DJ feature on the Zune HD device which is attached here; All a user needs to do is press the Smart DJ icon on the far right of the screen to build a new mix based on their favorite music.
In this article: 4.5, av dock, AvDock, dock, firmware 4.5, Firmware4.5, hands-on, marketplace, microsoft, microsoft zune, microsoft zune hd, MicrosoftZune, MicrosoftZuneHd, smart dj, SmartDj, video, xvid, zune, zune hd, zune hd 4.5, zune hd firmware 4.5, zune marketplace, ZuneHd, ZuneHd4.5, ZuneHdFirmware4.5, ZuneMarketplace
All products recommended by Engadget are selected by our editorial team, independent of our parent company. Some of our stories include affiliate links. If you buy something through one of these links, we may earn an affiliate commission.
Share
Tweet
Share