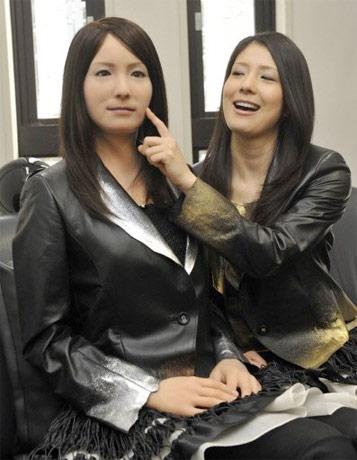 Hiroshi Ishiguro (or his evil android twin, one) is back in business, and nearly four years after his Geminoid HI-1 startled youngsters everywhere, the Geminoid-F has arrived to consternate the grown-ups. Shown off this weekend in Osaka, Japan, the lifelike lady you see above (pictured left, just in case you were wondering) was designed to mimic human facial expressions that are fed in to its internal computer. The rubberized face has a rather insane amount of flexibility, enabling it to pull off subtle gestures that have thus far been impossible to replicate on a robot. Sly grins, angry glares and totally-fake smiles are all possible now, with developers hoping to have these in hospitals and the like in the not-too-distant future. Currently, copies of the humanoid are expected to sell for around ¥10,000,000 ($105,780), though it'll likely be robotics research organizations doing the majority of the buying. Hop on past the break for a video that's guaranteed to leave you stunned -- and while we're not fluent in Japanese, we're pretty sure someone asks if they "can rock that bad Larry on their dome."

See more video at our hub!
In this article: female, female robot, FemaleRobot, Geminoid, Geminoid TMF, Geminoid-F, GeminoidTmf, Hiroshi Ishiguro, HiroshiIshiguro, humanoid, japan, Kokoro, osaka, Osaka University, OsakaUniversity, research, robot, robot apocalypse, RobotApocalypse, university, video, weird, woman, women
All products recommended by Engadget are selected by our editorial team, independent of our parent company. Some of our stories include affiliate links. If you buy something through one of these links, we may earn an affiliate commission.
Share
Tweet
Share