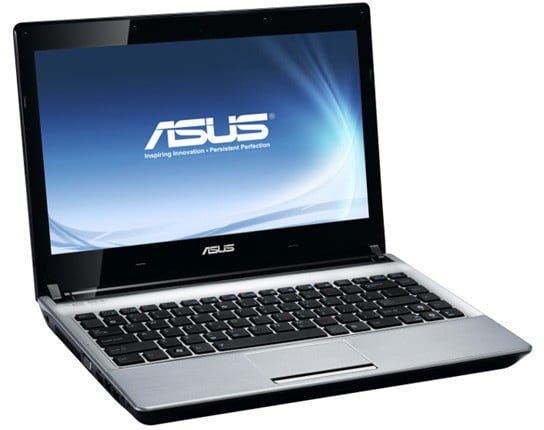 Core i3 laptops with no more than 2.5 hours of battery life... seen 'em. Intel ULV laptops that last for more than 5.5 hours... seen 'em. A Core i3 laptop with NVIDIA's Optimus discrete graphics that boasts 9.5 hours of battery life? Well, now that sounds new, and that's exactly what the 13.3-inch ASUS's U30Jc promises to be – that perfect chocolate vanilla swirl of portability and performance. But like us, you've got to be thinking there's got to be sacrifices here, right? We thought so too, but surprisingly enough they're extremely minimal considering the $900 pricetag. You aren't going to find out what they are up here -- hit that read more link for our full review.

How would you rate the U30Jc?
We want to hear what you think. Post a quick review now to join the conversation!
Write a review

We're still desperate to get our hands on a bamboo-clad ASUS U Series laptop, but the U30Jc is all about the brushed aluminum. And you know us fingerprint haters, we can't stand glossy lids, so we're naturally big fans of the elephant gray metal that covers the lid and palmrest. Sure, the overall aesthetic isn't as drool-worthy as the $1,899 Sony Z Series or even the Dell Vostro V13, but it's a system you wouldn't be ashamed to flaunt in public.

We don't want to spoil too much of the rest of the review, but you know those sacrifices we were taking about? The biggest one comes with the size of this machine. The 1.2-inch thick laptop is heftier than most of its class, and though it does have a DVD drive, both the 13-inch Sony Z Series and Apple MacBook Pro are substantially thinner at .95-inches tall. The extra girth does provide space for three USB, VGA, HDMI, Ethernet ports and a mic and headphone jack. Maybe with the recent flood of thin and light ULV laptops we just expect this sort of system to weigh less than four pounds, but no matter how you look at it, the 4.8-pound U30Jc is on the heavy side and more comfortably held with two hands when open.

Like most of ASUS' recent netbooks, the U30Jc has a chiclet-style keyboard that certainty beats the flex-ridden flush panel ASUS used on past U Series models. The matte keys are well-spaced and quite comfortable, though the slightly shrunken right Shift key is puzzling – there's plenty of room for a full size one.

We have to admit we miss the grid of raised dots that usually adorn ASUS touchpads, but the brushed aluminum coating on the U30Jc is smooth and similar in feel to that on MacBook Pros. Remarkably the pad was incredibly responsive to multitouch gestures – two finger scrolling wasn't jumpy at all like most others. We do wish that ASUS would take a knife and cut the single mouse bar in half to just give us separated right and left buttons, but it's still usable.

When, oh when, ASUS will you start using some decent LCDs? The 1366 x 768-resolution, 13.3-inch screen is incredibly glossy and kicks back reflections at most angles. And speaking of those angles, the horizontal and vertical viewing angles are, well, just crappy – tilting the screen back just to about 110-degrees washes out colors and viewing from the sides is also harrowing experience. The Altec Lansing speakers that live on the front lip of the system aren't overly tinny, but they aren't as loud as we expected. They're still good enough for personal listening.

We've gotten so used to reviewing 13-inch Intel ULV-powered laptops like the Vostro V13 and ThinkPad Edge 13, that we could actually notice the power boost of the U30Jc's 2.26GHz Intel Core i3-350M processor. Along with 4GB of DDR3 RAM and a 5,400rpm 320GB hard drive the system ran Windows 7 Home Premium along with Firefox, Microsoft Word 2007, GIMP, iTunes and TweetDeck simultaneously without any issue. Performance was quite snappy, but if you feel like subbing out the 5,400rpm hard drive for an SSD to get those programs launching even quicker you can easily do that with the latch on the underside of the system.

While the Core i3 CPU and its integrated GMA HD can handle 720p HD video and light gaming, it's the U30Jc's NVIDIA GeForce 310M GPU with 512MB of VRAM that gives the system some decent graphics muscle. Thanks to NVIDIA's new Optimus technology the GPU automatically kicked in when we fired up Batman: Arkham Asylum, and within minutes we were throwing punches at 30 fps. Similarly after we downloaded Flash 10.1 Beta 3, the 310M card automatically turned on when we watched a 1080p trailer on YouTube without any pauses or breaks. While most of the graphics switching is completely automatic, NVIDIA's control panel does allow for manually turning on and off the GPU.

Not having to flick a switch or manually adjust the system's graphics makes Optimus awesome, but it also majorly pays off in battery life. The GPU stayed off when we ran our standard definition video rundown test, and in turn the U30Jc's 84Wh eight-cell battery lasted for 4 hours and 10 minutes with brightness set to 65 percent. That's not quite as long as ASUS' predicted 9.5 hours, but that's about double the time of recent i3 laptops we've reviewed. With the GPU on it ran a loop of HD videos for 3 hours. Both of those numbers are, of course, on the extreme end of the battery spectrum – when we used the laptop to write this review, listen to music and intermittently watch some YouTube clips we stayed cord-free for about 5 hours and 30 minutes. The Sony Z Series lasted just around the same time and ASUS' ULV UL50Vf for over six hours, but we're still quite content with that runtime from a Core i3 laptop.

We were less than thrilled when we booted the U30Jc for the first time to find its desktop covered with preloaded ASUS programs and crapware – there's an eBay shortcut and Boingo installer to name a few. But we're not above saying some of those preloaded ASUS utilities are actually pretty useful – the FastBoot app, for instance, lets you decide what programs launch at startup and lets you delay the launch of others.

If you ask us, ASUS has struck gold with the U30Jc's Core i3 and NVIDIA Optimus combo, and we're crossing our fingers that Sony, Apple, Alienware and others follow ASUS down this path. While other 13-inchers may be lighter on the shoulder and some other mainstream laptops may pack more power, the $899 U30Jc buys you an incredible three-way balance of performance, graphics and endurance. And that's not something we say very often about a laptop that doesn't even set you back a grand.
In this article: asus, asus u30jc, ASUS U30Jc-1A, AsusU30jc, AsusU30jc-1a, core i3, core i3-350m, CoreI3, CoreI3-350m, Intel Core i3, IntelCoreI3, laptop, laptops, nvidia, Nvidia Optimus, NvidiaOptimus, optimus, review, SwitchableGraphics, u30jc, U30Jc-1A
All products recommended by Engadget are selected by our editorial team, independent of our parent company. Some of our stories include affiliate links. If you buy something through one of these links, we may earn an affiliate commission.
Share
Tweet
Share