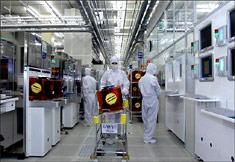 Here's an odd one. Samsung, which has been known to be on better-than-average terms with the South Korean government in the past, is launching independent investigations in response to reports that "toxic materials used in chip making may have caused cancer in some of its employees." In one of the more bizarre stories of the year, Samsung has recently come under fire from social and civic groups to actually look into the incidents, which were reported over a decade ago but were found to not be Sammy's fault by the aforesaid government. This week, the company admitted that 22 of its employees (who worked at a chip facility outside of Seoul) had been diagnosed with leukemia or lymphoma, and 10 of them had perished. Cho Soo-in, president of Samsung's memory division, told the media that the firm is "deeply sorry about the loss of loved ones," and that it "actively cooperated on epidemiologic investigations, which concluded there were no leaks of radiation." We've got a feeling we know exactly what will be concluded here, but we'll certainly keep an ear to the ground for anything atypical.

In this article: cancer, cpu, korea, leukemia, lymphoma, processor, safety, Samsung, Samsung electronics, SamsungElectronics, south korea, SouthKorea, toxic
All products recommended by Engadget are selected by our editorial team, independent of our parent company. Some of our stories include affiliate links. If you buy something through one of these links, we may earn an affiliate commission.
Share
Tweet
Share