T. Stevens
April 19th, 2010
In this article: feature, featured, features, logitech, logitech squeezebox, logitech squeezebox radio, LogitechSqueezebox, LogitechSqueezeboxRadio, review, squeezebox radio, SqueezeboxRadio, stream, streaming, video
Logitech's touch-sensitive addition to the Squeezebox family, aptly named the Touch, has taken a long and hard road to retail. First uncovered by the FCC almost a year ago, announced by Logitech back in September of 2009, and then delayed again and again, we've finally managed lay our hands on one and, more importantly, start putting some fingerprints on its 4.3-inch capacitive touchscreen. Does it deserve a hallowed place in the Squeezebox canon and, more importantly, is it worth the $299 -- $100 more than the Squeezebox Radio we reviewed last year? Those answers and more after the break.
%Gallery-91127%
Logitech 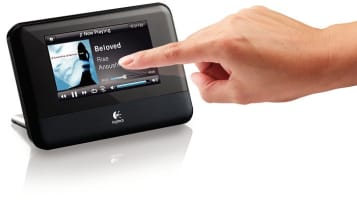 If you're not familiar with the Squeezebox line, it's a series of radios and receivers that pull tunes from a media server over the network. Squeezebox devices don't rely on DLNA or UPnP or other standards like that, instead sucking down bits courtesy of custom software from Logitech called, appropriately, Squeezebox Server that must be installed and running on a desktop or laptop computer (or ReadyNAS) to serve up both locally-stored music and internet stations. Thankfully it's available for every major OS, like Windows (including Home Server), Mac OS X, and Linux. You can even download the source code if you know your Perl. The Touch then connects over a local network over either 802.11 or Ethernet to pull in music, though it can also connect to external storage via USB or the SD slot on the side.

The last addition to the Squeezebox lineage, the Radio, exists as something of a simple, semi-portable desktop or bedside solution for playing tunes wirelessly and even getting you up for work in the morning. The Touch feels just as solid and well built as the Radio but is rather different in intent -- a little more serious. Unlike the Radio it doesn't have a proper speaker built in, relying instead on external speakers provided by you. Nestled on the back are outputs for stereo RCA, optical and coaxial digital, and a simple 3.5mm port. This gives the Touch the flexibility to connect to anything from a high-end home theater setup to a simple set of powered speakers or even headphones if you're so inclined.

But, for the cost, $299, we're expecting most people investing in the Touch will be looking to utilize those higher-quality outputs to connect it to a receiver or the like. And, in that mode -- sitting atop a home theater stack -- it works well, pumping out its beats interference-free. Unfortunately that setup isn't always compatible with the best way to interact with the Touch: touching it.


Naturally that big, reasonably bright 4.3-inch capacitive touchscreen on the front is the primary way to find your tunes here. Tap the screen and a simple, finger-friendly interface comes up that allows you to browse through artists, albums, playlists, and also to search using an on-screen keyboard. That's nice and intuitive but, honestly, how often are you standing next to your home theater setup when you want to pick some tunes?

The Touch also can be used via remote control, and it does include one (though surely Logitech would love you to replace it with a Harmony). As soon as you touch a button on the remote the text grows larger, the menu options swell, and in general everything gets legible from across the room, though the default light-blue wallpaper doesn't help to highlight the white text. Thankfully that's easily changed to something higher contrast. It's workable from afar, but interacting with the Touch is naturally much less satisfying with a remote -- certainly nothing like the Duet. Thankfully, defining playlists is quick and easy, so you can queue up a series of tunes while standing next to the stereo and then go away and do whatever you like.

The Touch offers the ability to download and run apps, but we're not seeing a wealth of new apps available here since the Radio shipped in October. We're guessing that means we also shouldn't expect many new options going forward, either, but the current options are still nice, including Facebook for checking up on your friends and Flickr for cruising photos.

The Touch is another great addition in the Squeezebox series and, for many, the missing link in home entertainment system that needs only network connectivity. Build quality is predictably top-notch, audio quality is great, and compatibility with nearly any OS is killer. But, it's best suited for a situation where your entertainment system isn't too far out of reach, because interacting with the Touch is, unsurprisingly, best when you can touch it. If that's you, we think it's a great option, but we're thinking the Duet is still a slightly more couch-friendly option if your entertainment center is out of reach -- and if you don't mind having another remote kicking around, of course.
All products recommended by Engadget are selected by our editorial team, independent of our parent company. Some of our stories include affiliate links. If you buy something through one of these links, we may earn an affiliate commission.