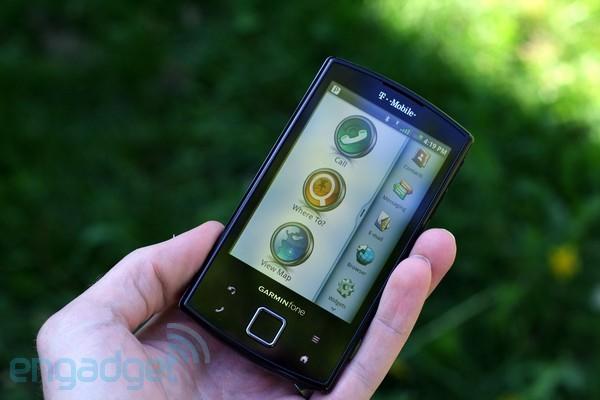 The holy matrimony between smartphone and personal navigation device just keeps getting stronger, scorning dedicated GPS units like forgotten flings and leaving navigation-free handsets wandering lost and alone. Garmin-Asus has been flirting with the perfect bond with its Nuvifone series for some time now, but rather tragically from a branding perspective its strongest attempt yet comes without the nuvi moniker. It's the T-Mobile Garminfone, and its Android underpinnings go a long way toward making the best mix of PND and smartphone to date. How would you rate the Garminfone?
We want to hear what you think. Post a quick review now to join the conversation!
Write a review

Compared to the Nuvifone G60, which took ages to become a reality, the Garminfone blossomed from announcement to functional piece of hardware in a (relatively) amazing single month period. You'll have to wait a few more weeks before this one starts popping up at T-Mobile stores sometime in June, but it should be worth it.

We're guessing that accelerated pace is thanks at least in part to internals shared with the G60. The phones are a very similar size and shape and, with similar specs, it's clear to see who the Garminfone's daddy is. That does leave this handset feeling a bit dated, partly thanks to the miniUSB port that is a bit antiquarian in today's microUSB world. Also odd is the complete lack of a headphone jack, leaving you stuck with a miniUSB adapter. Honestly we're not sure if that's a step up or a step down from the G60's 2.5mm output.

Overall, though, the phone has a nice design, with a subtly rubberized back cover that fits so well it took us a moment to figure out how to get it off. That back is split by a brushed metal highlight, giving a high-end look, and the 3 megapixel camera finds itself wedged atop that, which delivers decent images (an example of which is below). Pictures are stored to microSD expansion, with a measly 2GB card included.

The right side contains the volume rocker and camera button, the power button is middle top, and below the screen reside four touch buttons plus a five-way rocker. The touch buttons are the standard Android crop except that search has been replaced by a phone button, meaning you're a single press from the dialing screen -- a very useful substitution.

The screen is a 3.5-inch capacitive HVGA unit. It's bright, clear, and very responsive to touches, but it sits atop a device that is definitely on the large side. Stacking it up against its beefy Android cousin, the Motorola Droid, the Garminfone is virtually the same height and width, coming in only a few mm thinner. With the Droid that heft nets you a physical keyboard, yet Garmin-Asus couldn't even manage to fit a headphone jack in here? Curious.

For your $199 the phone comes with a windshield mount and a car charger, which can either plug into the phone directly or into the mount thanks to contacts that charge the phone while it's docked. It's a nice feature and one you'll definitely need: after roughly an hour on the road the battery in our Garminfone was down to about a third remaining, but in day-to-day usage it matched the Droid's wireless endurance.

The Garminfone runs on Android, but you'd really never know it at a casual glance. The initial home screen looks much like the other Nuvifone UIs, with large buttons for calling and navigation along with smaller icons running up the side for less frequent tasks. With the Garminfone you can grab that list on the side and give it a tug, revealing a separate stack of icons. In here you see the Market app and the Android underpinnings become clear.

This seems to be built upon Android 1.6, and while we're not sure of the version we are sure that it isn't capable of running some of the 2.0 and above apps in the Market. Other apps download and run fine, even Google Maps with Navigation, but chances are you won't want to be using that -- more on that in a moment.

Google Maps on the phone does not support multitouch gestures, but the built-in browser and gallery apps do, meaning pinch-to-zoom is a possibility. The browser also supports the spring bump effect when scrolling to the top or the bottom of the page, something you don't often see outside of the iPhone.


There are fewer things left alone here than changed, with everything from the lock screen to the OS settings menus completely re-invented. It is, perhaps, slightly more intuitive for a casual user than the default Android install, but we fear that power-users won't feel at home here. For one thing, there's no way to create folders or to organize your app icons onto multiple pages. There's just that big list. You can drag entries around to change order, or move them to and from that smaller list on the side of the home page, but if you're not the selective sort when it comes to downloading you'll be doing a lot of scrolling. Also, there's no wallpaper to change, unless you count the lock screen.

Also, the Android home pages have been hidden, only accessible when doing a long press of the home key. Instead of getting the usual task-switching menu that you'd expect you get five blank pages that you can fill with widgets, widgets, and more widgets -- but no app shortcuts.

So naturally the big story here is with the navigation, and quite simply it's good. Very good, as you'd expect from a phone that sacrifices two thirds of its home page to giant nav-related icons. For those familiar with the earlier Garmin-Asus phones the interface here is quite similar, but for those who aren't we'll give you the details.

First-off, let's make it clear that this works completely offline, unlike Google Navigation, meaning you can still get directions even if you're standing in the darkest of data coverage black holes when beginning your trip -- and with T-Mobile if you're not close enough to a highway to hear the trucks rumbling by that's a real possibility. Only the Google Local Search portion of navigation requires an active data connection, which you will want to be using whenever possible. The offline POI database here is good but failed to find a local theater that opened two years ago, never mind a two-month-old restaurant. Local Search found both.

Once you know where you're going, things are quite good. Address entry is painless, and you'll get an overhead view of the destination from which you can scroll around and even get a 360 flyby view. Tap "Go!" and you're on your way following either driving or walking directions, the latter with public transportation mixed in -- but only in limited markets where Garmin's cityXplorer extension covers.

You can also easily create routes, either adding a waypoint to the route you're currently on or using a dedicated app that allows you to plot your course before you turn a wheel. This is something sorely lacking in Google Navigation and that we're glad to see here. Once you get going POIs can be searched near your current location or on the current route and, if you find something, it can be easily added as a via point. The only problem here is we weren't able to find a way to skip a point that's been added to your route, meaning if you decide that Taco Bell break perhaps isn't such a good idea the phone will keep trying to convince you otherwise -- loudly. The speaker on the back of this phone is powerful enough to ensure that even those in the back seat will know exactly what the courteous and friendly omniscient navigator is telling you to do.

Traffic data is included here for free, though the phone warns you that you may wind up seeing a few ads mixed in from time to time to cover it. (We didn't see any during the course of this review.) If traffic is noticed anywhere along or near your route the phone will throw up an indicator to warn you. Tapping that lets you view a map of all local traffic problems or just see which incidents are along the way. It's perhaps not quite as detailed as TomTom's latest traffic interface, but it's comprehensive and quick enough to tell you what you need to know. You can also get a list of all nearby traffic issues.

Additionally, the on-screen speed limit display will help to keep you from becoming a traffic issue yourself, a nice feature that we wish worked on more secondary roads. About the only thing we don't like is that there's no way to display POIs on the map as you travel, which does keep things clear and focused, but if you always like to know where the closest gas station is you'll need to keep searching. Oh, and the lack of an auto-dimming night mode is unfortunate as well. This screen is bright enough to be blinding once the stars come out.

For $199, the Garminfone is an interesting choice. While T-Mobile's selection of Android handsets continues to expand (most excitingly with the upcoming myTouch 3G Slide), fans of little green robots still don't exactly have a lot of choices on that carrier, which makes the 1.6 build of Android on here a bit easier to stomach. It's worth noting that, given the extensive customization, we'd be surprised if a 2.0 or 2.1 update hits this phone any time soon -- if ever.

That, plus the somewhat limited ability to personalize the OS compared to a stock build, means this is probably not an ideal choice for the most serious of Android users. But, with multitouch on-tap and fantastic navigation built-in, you're not missing an awful lot -- and it really is fantastic navigation. It's nearly as good as Google Navigation in terms of interface and usability, but trumps that competition by working fully offline and easily matches the best mobile navigation options on other platforms.

So, as we have in the past with Garmin-Asus offerings we again have to conclude that this is not a phone for power users, but the inclusion of the Android Market does mean that the group of people who would feel constrained is much smaller than with the G60, for example. Compared to that option the Garminfone is far less a nav device with a phone built in and far more of an equal share of both. A match made in heaven? Pretty darned close.

Update: Two updates courtesy of Garmin. First off, you can create a folder, but naturally it's not like you would in normal Android. Instead of a long press and hitting a context menu here you press the menu button and then hit "Add" to create a folder, which then gets thrown in at the bottom of your icons. Also, there is a night mode, but it's hidden under a screen setting called "Color Mode" which we simply didn't think to look under. The text above has been updated.
In this article: android, android 1.6, Android1.6, asus, feature, featured, features, garmin, garmin-asus, garmin-asus garminfone, Garmin-asusGarminfone, garminfone, gps, navigation, pnd, review, smartphone, t-mobile, t-mobile garminfone, T-mobileGarminfone, video
All products recommended by Engadget are selected by our editorial team, independent of our parent company. Some of our stories include affiliate links. If you buy something through one of these links, we may earn an affiliate commission.
Share
Tweet
Share