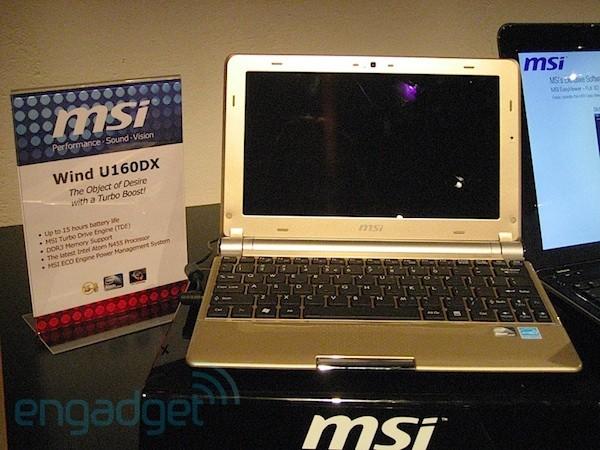 It may just seem like yesterday that MSI was introducing its Wind U160 netbook at CES, but the company's now already back with an updated model in time for Computex: the Wind U160DX. While it's outward appearance remains mostly the same, the netbook's internals have been upgraded across the board, including a new Atom N455 processor, some DDR3 memory, MSI's own "Turbo Drive Engine" and, last but not least, a 15-hour battery (aided in part by MSI's ECO power management system). Still no word on pricing or availability for this one, but we should be hearing more about it soon enough at Computex, and you can get a closer look at it right now courtesy of Engadget Spanish at the link below.
In this article: computex, computex 2010, Computex2010, msi, msi wind, MsiWind, netbook, turbo drive, turbo drive engine, TurboDrive, TurboDriveEngine, u160dx, wind, wind u160dx, WindU160dx
All products recommended by Engadget are selected by our editorial team, independent of our parent company. Some of our stories include affiliate links. If you buy something through one of these links, we may earn an affiliate commission.
Share
Tweet
Share