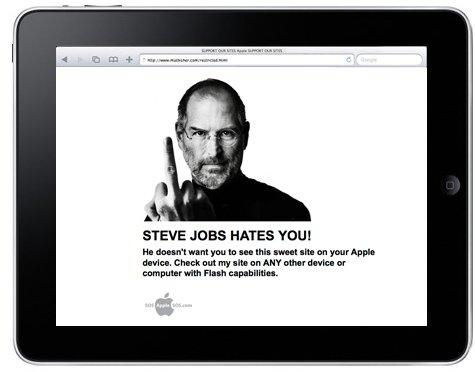 Love or hate Flash it's safe to say the internet isn't the internet without it -- at least for now. Most mobile platforms don't support the stuff for technical reasons, but few have been more brazen in their intentional lack of support than Steve Jobs. The creators of the SOS Error Page are trying to send a message to Apple and the man himself by... well, we'll just let them explain:

Daring, controversial, and effective? More like busted, as this doesn't actually detect Safari Mobile. It instead is triggered by any browser that doesn't support Flash. In other words, installing this little redirect on your site is a great way to really piss off anyone on Android (pre 2.2, natch), Windows Mobile, Opera Mobile, Lynx... you get the picture. Steer clear.

Update: We got a good news / bad news update from the SOS crew. Good news: the script has been updated to only show up for iPad and iPhone devices. Bad news: they were told that the image they were using had to be "modified slightly," resulting in a new image that shows rather more black box than CEO. If only there were some place that still showed the original image...

In this article: apple, apple flash, AppleFlash, browser plugin, BrowserPlugin, flash, safari mobile, SafariMobile, sos apple sos, sos plugin, SosAppleSos, SosPlugin
All products recommended by Engadget are selected by our editorial team, independent of our parent company. Some of our stories include affiliate links. If you buy something through one of these links, we may earn an affiliate commission.
Share
Tweet
Share