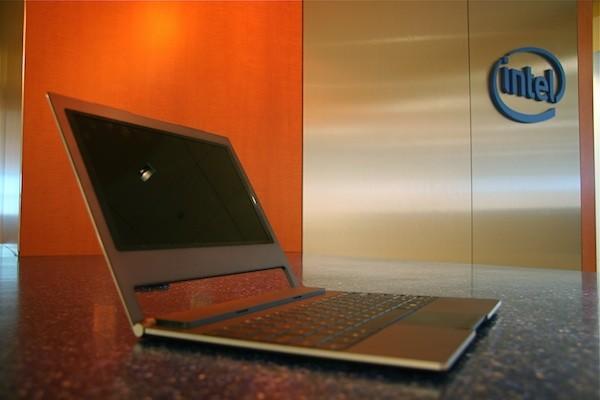 You're really coming full circle at this year's Computex, aren't ya, Intel? It was at the Taipei show two years ago that Chipzilla introduced the first Atom netbooks, and though it's taken awhile, the company is finally announcing dual-core Atom processors for the category (not to mention slightly changing its party line on the power of the sub-laptops). While the details on the speeds and feeds of the new Pine Trail N series CPUs are being kept under wraps for now, we've been told that they'll support DDR3 RAM and provide comparable performance to the dual-core desktop Atom processors, yet still maintain similar battery life to current netbooks. Intel still plans to keep these Atom chips in 10-inch systems, and told us that users will see the speed benefits in multitasking and browsing, rather than in HD playback and gaming.

But netbooks aren't only about to get faster, they're also going to go on a serious diet. Intel also unveiled its new "Canoe Lake" innovation platform for netbooks, which is what's behind that 14mm thick machine pictured above. The platform can support single- and dual-core Atom processors, but provides significant cooling to allow for 50 percent thinner systems. However, "Canoe Lake" is merely a reference guideline for other manufacturers to use, so there's no telling what the machines that use this could end up looking like. The dual-core Atom for netbooks goes into production next week and should be shipping in netbooks before the holiday season. And as for that super thin laptop you're inevitably still peering at? Intel expects its partners to use the platform and have products out by the end of this year. We don't know about you, but the pictures below may keep us salivating until then.

In the past 45 days, Intel and its Atom processor has entered a variety of markets beyond the more than 50 million Intel-based netbooks sold in the past two years. Intel announced a processor and MeeGo* software win with Chinese carmaker HawTai Automobile for a future in-vehicle-infotainment platform; a greater than 50-times platform idle with Intel‟s next generation Atom processor platform for handheld devices including smartphones; and a deal with Google, Sony and Logitech around Intel-based "Smart TVs" running Google Android*.

The Intel Atom processor also powers the Intel® Reader, and the company has received more than three thousand non-PC design inquiries – most new-to-Intel potential customers – ranging from fish finders to golf carts. Intel also recently unveiled the future System on Chip (SoC) Atom-based "Tunnel Creek" that, for the first time, will allow other companies to connect their own custom silicon to Intel‟s SoC product.

During his keynote at Computex, David (Dadi) Perlmutter, executive vice president and co-general manager, Intel Architecture Group, touched on these and other Intel efforts, which included showing off the world‟s thinnest netbook running on the upcoming mobile dual-core Intel/Page 2

"Pine Trail." At just 14mm, the razor-thin "Canoe Lake" innovation platform runs cooler and is 50 percent thinner than any other netbook consumers can find on the market today.
"Intel believes the strength of the Atom franchise can help consumers realize the true potential for a common experience to enable the compute continuum," said Perlmutter. "With platforms ranging from compact and portable netbooks, to smart TV devices and innovative tablets designs, Intel Architecture is driving innovative products based on a unique „port of choice‟ software strategy."

Keynote Highlights
Citing a million PCs sold a day1, Perlmutter also highlighted the momentum around the all new 2010 Intel® Core™ processor family, including Intel® Wireless Display, and an overview of next-generation Intel® Core™ processors using the Intel microarchitecture codenamed "Sandy Bridge," targeted to be in production late 2010.
Renee James, senior vice president and general manager of the Software and Services Group at Intel, joined Perlmutter onstage to discuss how software – and software choice – will help drive Intel‟s vision for Atom and a cross-device experience. This provides consumers consistency and accessibility to their content on a choice of computers and PC-like devices. James also announced Asus will be the first OEM to ship a pre-installed, customized AppUp client called "asus app store" on netbooks this fall, beginning with Windows and following with MeeGo-based systems.

New Atom Processors on Tap
In production next week and on shelves before holiday, mobile dual-core Atom will deliver a noticeably snappier, more responsive consumer experience in the same compact form factors, and with the same great battery life. Intel Atom processors N455 and N475 with DDR3 support for netbooks are available today and D525 and D425 for entry-level desktop PCs will be available on June 21st. Available to customers early 2011, "Oak Trail" is optimized for sleek tablet and netbook designs, and will deliver up to a 50 percent reduction in average power consumption with full HD-video playback and targeting software choice including MeeGo*, Windows* 7 and Google operating systems.


Intel is a world leader in computing innovation. The company designs and builds the essential technologies that serve as the foundation for the world‟s computing devices. Additional information about Intel is available at www.intel.com/pressroom and blogs.intel.com.
– 30 –

* Other names and brands may be claimed as the property of others.
1TAM projection, 369Mu, per MS&F Feb 26th forecast