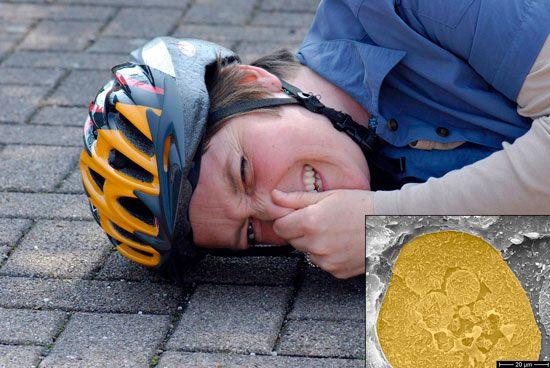 We're glad you're using a bike helmet (and we're glad you've opted for that really scary one we first saw in 2007). You do realize, however, that the more blows to the head you receive, the less effective the headgear is, right? Researchers at Germany's Fraunhofer Institute have developed a manufacturing process that injects microcapsules containing malodorous oils into the helmet itself, causing it to stink when damaged -- alerting you that it's time to replace it (and making it difficult to try and make do with a less than safe one, at that). Indeed, the process, which a thick foil made of polypropylene to house the microcapsules, extends to other products as well, including: pressure hoses, water, and gas pipes (in which case the odor can be detected by automated "smell sensors"). As for the lids, they're still trying to decide exactly which scent to use, but we have a suggestion -- smelling salts. Seems logical, right?

In this article: bicycle, bike, bike helmets, BikeHelmets, chemistry, fraunhofer, helmet, odor, olfactory, stinky
All products recommended by Engadget are selected by our editorial team, independent of our parent company. Some of our stories include affiliate links. If you buy something through one of these links, we may earn an affiliate commission.
Share
Tweet
Share