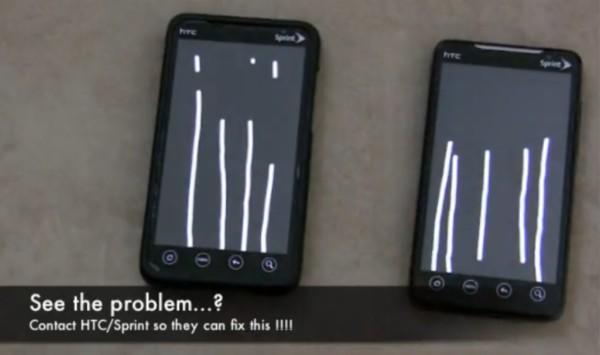 Uh oh: on top of reports that the EVO 4G suffers screen-detachment issues, we're also starting to hear that the touchscreen sensor is inconsistent, particularly when the phone isn't grounded. We've seen more than one report and video purporting to show the EVO's touchscreen failing to smoothly register touches when the phone isn't being handheld (and thus grounded). We haven't been able to reproduce the issues ourselves, but trust us when we say we've heard from enough unhappy EVO owners to believe that the problem is real. What's more, there's also an older video showing the same problem on three different Droid Incredibles, which obviously shares strong family ties to the EVO. We've pinged HTC, we'll let you know what we hear -- for now, get your sad faces on and watch the videos after the break.

In this article: bug, bugs, droid, droid incredible, DroidIncredible, evo, evo 4g, Evo4g, grounded, htc, incredible, issues, problem, problems, screen, sprint, touchscreen, touchscreen issues, touchscreen sensitivity, TouchscreenIssues, TouchscreenSensitivity, verizon, video
All products recommended by Engadget are selected by our editorial team, independent of our parent company. Some of our stories include affiliate links. If you buy something through one of these links, we may earn an affiliate commission.
Share
Tweet
Share