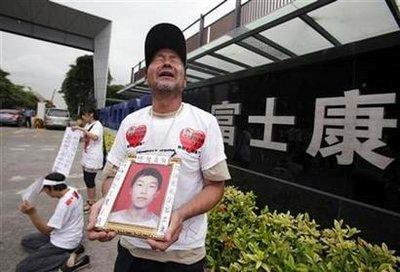 We've been struggling to wrap our heads 'round this whole Foxconn imbroglio since the beginning, and while we're pretty skeptical about any official reports we'd be remiss if we didn't mention that the Human Resources and Social Security Ministry in China was looking into the thing, and that they'll be releasing the findings somewhat soonish. According to Vice Minister Zhang Xiaojian, recent strikes at various factories including Brother and Honda (strikes seemingly sparked by the Foxconn incidents) do not constitute "a 'wave' of unrest." Well, that's good -- for business owners, at least. And while the families of the Foxconn suicides maintain that long hours, low pay, and harsh management are to be blamed, Zhang added that "the psychological problems of the workers" can be added to the list. Psychological problems caused by low pay, long hours, and harsh management, perhaps?

[Thanks, Xinh]
In this article: china, cost, factory, foxconn, hon hai, hon hai precision, HonHai, HonHaiPrecision, Human Resources and Social Security Ministry, HumanResourcesAndSocialSecurityMinistry, manufacturing, salary, shenzhen, suicide, suicides, taiwan, terry gou, TerryGou, wage, welfare, working conditions, WorkingConditions, Zhang Xiaojian, ZhangXiaojian
All products recommended by Engadget are selected by our editorial team, independent of our parent company. Some of our stories include affiliate links. If you buy something through one of these links, we may earn an affiliate commission.
Share
Tweet
Share