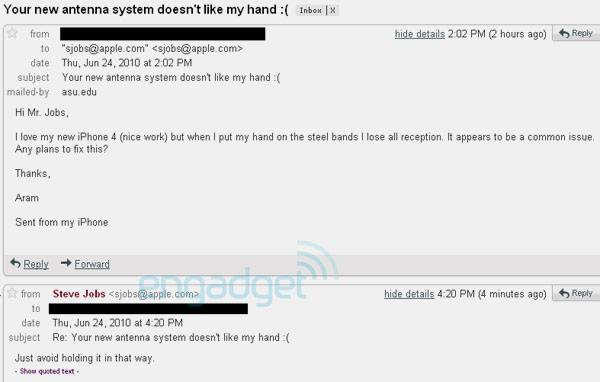 So, we just spoke with Apple and got the straight dirt on the reception issues that have been plaguing users today... and it's a little surprising. In essence, Apple cops to the fact there are reception issues with the new iPhone -- namely, that if you cover the bottom-left corner of the phone and bridge the gap between the notch there with your naked flesh, you could see some signal degradation. Yes, you read that right: it's not a software or production issue, simply a matter of the physical location of your hand in regards to the phone's antenna. The company's suggested fix? Move your hand position, or get a case which covers that part of the phone, thus breaking contact. As you can see in the email above which just arrived in our tip box, this is a sentiment which runs pretty high at the company. Here's the official statement:

Gripping any mobile phone will result in some attenuation of its antenna performance, with certain places being worse than others depending on the placement of the antennas. This is a fact of life for every wireless phone. If you ever experience this on your iPhone 4, avoid gripping it in the lower left corner in a way that covers both sides of the black strip in the metal band, or simply use one of many available cases.

We know what you're thinking, and we're thinking it too: this sounds crazy. Essentially, Apple is saying that the problem is how you hold your phone, and that the solution is to change that habit, or buy one of their cases. Admittedly, this isn't a problem that exists only for the iPhone 4 -- we've seen reports of the same behavior on previous generations (the 3G and 3GS), and there is a running thread about this problem with the Nexus One. While it is definitely true that interference is an unavoidable problem, we can't help feeling like this is really a bit of bad design. If the only answer is to move your hand, why didn't Apple just move the antenna position? What we can say without question is that in our testing of the phone, we had improved reception and fewer dropped calls than we experienced with the last generation, and we never noticed this issue. Additionally, when using a bumper we can't recreate the signal loss. So, now we have an answer... all we're wondering is whether or not the company will start handing out bumpers pro-bono to those who are experiencing problems. It certainly seems like the right thing to do.

Update: To add a little perspective, check out a video from 2008 after the break showing the same issue with the now-ancient iPhone 3G (thanks Inge).

In this article: apple, apple iphone 4, AppleIphone4, breaking news, BreakingNews, gear, iphone 4, Iphone4, mobile, reception
All products recommended by Engadget are selected by our editorial team, independent of our parent company. Some of our stories include affiliate links. If you buy something through one of these links, we may earn an affiliate commission.