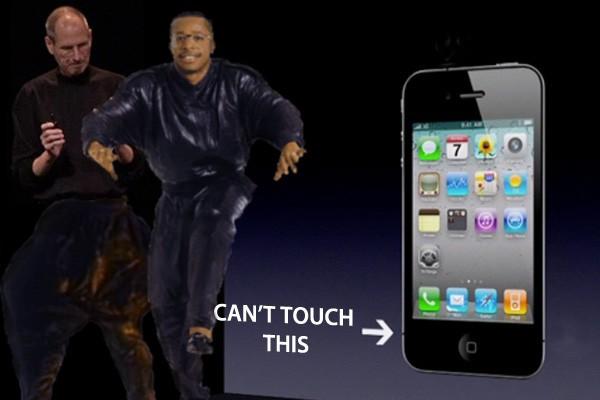 What's more annoying than spending hours lining up for a shiny new gadget? Learning that your precious phone can't actually connect to the network. Well, depending on how you hold it -- word has it that the iPhone 4's bottom-left corner isn't playing nice with your skin. If you recall from the keynote, that's where the Bluetooth / WiFi / GPS antenna meets its GSM / UMTS counterpart. So we decided to test on two brand new iPhone 4 handsets purchased today in the UK.

One iPhone 4 demonstrated the issue everytime it was held in our left hand (as a right-handed person is apt to do) so that our palm was essentially bridging the two antennas. You can see that in the video after the break. Bridging the two with a finger tip, however, didn't cause any issues with the reported reception. If we had to guess, we'd say that our conductive skin was acting to detune the antenna -- in fact, we've already managed to slowly kill two calls that way so it's not just an issue with the software erroneously reporting an incorrect signal strength. That said, we had no issues when Apple's $29 rubber bumper accessory (given to us free for standing in line) was attached, creating a buffer between our palm and the antennas. Our second UK-purchased iPhone 4 was fine, showing none of these handling symptoms. See the video evidence after the break including Insanely Great Mac's version which got us to worrying in the first place.

P.S. Don't forget to take our poll and let us know if you're seeing both the yellow spots / stripes and reception issues. Unfortunately, we're suffering from both flaws which is not a good sign for quality control on this first batch of Apple handsets.

P.P.S. Since some of you are asking, our review unit showed none of these issues.

Update: Apple responds to the issue, and boy, it's a doozy.

In this article: antenna, apple, apple iphone 4, AppleIphone4, bumper, call drop, CallDrop, cellphone, hands-on, iphone, iphone 4, Iphone4, issue, mobile phone, MobilePhone, phone, signal, signal drop, SignalDrop, smartphone, video
All products recommended by Engadget are selected by our editorial team, independent of our parent company. Some of our stories include affiliate links. If you buy something through one of these links, we may earn an affiliate commission.
Share
Tweet
Share