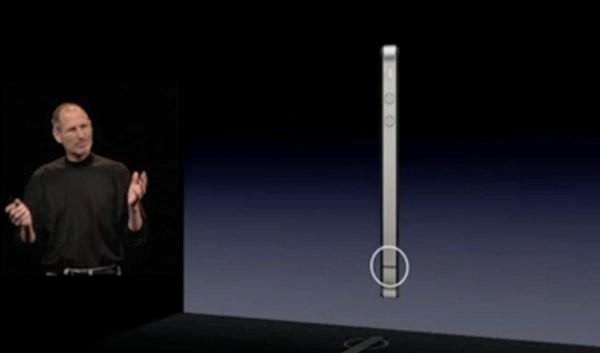 When we first exposed the iPhone 4 to the world, many of you were skeptical about its authenticity. Frankly, so were we, initially anyway. A device with black seams disrupting its otherwise clean lines just couldn't be from Apple, a company notorious for its obsessive design aesthetic. Well, now that the iPhone 4 is official, Steve took a moment to explain that the stainless steel band is actually an integral part of the iPhone's antenna system -- one part dedicated to Bluetooth, WiFi, and GPS; the other larger half to UMTS and GSM. Something that, according to Steve, has never been done before in a phone. We'll have to wait a bit before we know whether this "brilliant engineering" translates into fewer dropped calls for frustrated AT&T customers. But it's hard to imagine that Apple would take the time to show its antennas to developers if there wasn't a downstream reward for consumers. Remember, Steve did say last week that things "should be getting a lot better soon" on AT&T. Click through to hear Apple's loyal software developers ooh and aah over the iPhone's really cool ability to convert electromagnetic radiation into electrical current, and back. Amazing.

In this article: antenna, antennas, apple, att, bluetooth, call quality, CallQuality, dropped calls, DroppedCalls, gps, gsm, iphone, iphone 4, Iphone4, reception, steve jobs, SteveJobs, umts, video, wifi
All products recommended by Engadget are selected by our editorial team, independent of our parent company. Some of our stories include affiliate links. If you buy something through one of these links, we may earn an affiliate commission.
Share
Tweet
Share