R. Lai
@richardlai
June 28th, 2010
In this article: android, cell phone, CellPhone, featured, features, htc, htc sense, htc sense ui, htc wildfire, HtcSense, HtcSenseUi, HtcWildfire, mobile phone, MobilePhone, phone, review, sense, sense ui, SenseUi, smartphone, video, wildfire
If phones could make babies, then this HTC Wildfire would indubitably be the love child of the Desire and Nexus One. But of course, the humdrum reality is that 'tis just an Android 2.1 replacement for the entry-level Tattoo -- same 528MHz Qualcomm MSM7225 processor, 3.2-inch 320 x 240 capacitive LCD touchscreen instead of 2.8-inch resistive, 384MB RAM instead of 256MB, and a 5-megapixel camera instead of 3.2 (although quality matters more, obviously). So can this affordable handset provide enough bang for the buck to satisfy Europeans and Asians? Can the aging processor keep Sense UI well oiled? All will be revealed after the break.%Gallery-96128%
HTC
0
SCORE
Engadget
N/A
Critics
5 reviews
72
Users
20 reviews
68 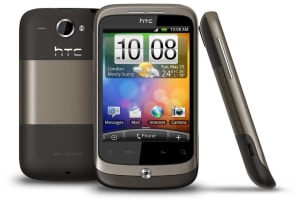 
At first glance, the Wildfire's a pretty handsome and familiar-looking device, but if you're not a fan of this subtle brown finish, there are three more color options. You can see several elements borrowed from the company's two other Android handsets -- touch buttons and the reassuring back texture from the Nexus One, although the buttons don't work as well on the big daddy; optical trackpad, earpiece, chin, and body frame from the Desire (read: not unibody à la Nexus One). The back is styled like the HD2 with a wide metallic band, but it's not the metal that you take off for the battery bay -- the actual cover needs to be peeled off with some effort from the top (like the Desire). When held in hand, the phone feels like a shorter Desire but equally as sturdy.

The chin below forms part of the back cover, but this is where we spotted the Wildfire's first physical flaw: we saw an uneven cut between the body frame and the chin. This does no justice to HTC's impressive build quality on most of its other devices, but as an entry-level device, we'll need to go easy with this level of detail. Swinging around to the left side you'll see the shiny volume rocker -- which feels well-built -- and micro-USB port, and on the back you have the five-megapixel camera sandwiched by the loudspeaker and LED flash.

To meet the lower price point, HTC's opted for the good ol' LCD instead of AMOLED on the Wildfire. Sadly, the infamous mirror effect is still present albeit not as strong the Desire's and the Hero's. See for yourself in the video below where we compare this with the screens on the Desire, Hero, Dell Streak and iPhone 4 (HD playback highly recommended for more realistic results). Whilst on this topic, we're also a bit upset that due to the low 320 x 240 resolution, some apps -- including our own -- did not appear in the Wildfire's Market. Ah, the good ol' fragmentation problem. For future reference, potential Android users should look at devices with a minimum resolution of 480 x 320 to get the most support.


The Wildfire's been given the same HTC Sense UI blessing as its other 2.1 siblings -- highlights include Leap for switching between homescreens, FriendStream widget for stalking your friends, an intuitive text highlighting tool (which is dangerously similar to the iOS's), built-in Flash Lite, and a keyboard that many have shown preference to over the stock version. Like the Legend, live wallpapers are -- no pun intended -- sensibly disabled on the feeble Wildfire. Still, we noticed the occasional hiccups every now and then, and we've had a few crashes from the internet browser plus the slow camera app. Looks like the CPU's the main culprit here, considering the Legend also rocks 384MB of RAM but doesn't suffer from such issues. On a similar note, Flash web content took minutes to load on the Wildfire, and even if you have the patience, the low frame rate leaves a lot to be desired. You can see this demoed in the video above.

Despite the list of issues, we managed to get almost twelve hours of battery life on just 3G data connection, while enjoying the occasional music, photo-snapping, video recording, Twitter, FriendStream, and web browsing. Pretty impressive considering we only got about eight to ten hours on our Legend (also donning a 1,300mAh battery but with a newer and supposedly more efficient CPU) -- perhaps HTC's AMOLED screens do suck up a fair bit more juice than LCDs. Adding to the list of positives are the vast range of supported audio file formats, stereo Bluetooth audio (which worked flawlessly for us), and built-in FM radio. We wouldn't recommend using the rear loudspeaker for audio entertainment, but the supplied handsfree kit's pretty decent -- too bad it isn't the noise isolating-plug type, nor did its mic perform well in our noise test (but the phone's built-in mic wasn't any better, as demoed in the earlier video).

We've already praised HTC's multimedia apps in our Desire and Legend reviews. Nothing much has changed for the music player -- still as intuitive and stable as before. On the other hand, the gallery app is notably slower at loading pictures, and video playback is much worse -- we can understand that 720p playback isn't feasible with the old CPU (in fact, all our 720p clips froze up the gallery app), but with 640 x 480 MP4 clips coming out at low frame rates, you'd have to wonder who on Earth would buy this when there are featurephones that can do much better. Sorry HTC, but this smartphone ain't working out for us.

Moving on to the keyboard: if you ask the Android community, many would say HTC has one of the best virtual keyboards, but we have a feeling that the Wildfire won't make it to the list. No, it isn't to do with the slightly more crammed keys -- we were still able to type well with that; we're just annoyed by the slow response to our typing. That said, we must commend HTC for yanking the hide keyboard button -- the Back button below the screen does the job anyway -- to extend the space bar, plus the keyboard settings button now prompts a customizable list of international keyboards for quick switching. Not that this means we'd be less frustrated by the laggy keyboard, though.

Just like any other HTC device, don't expect mind-blowing picture quality -- especially in low-light condition -- from the Wildfire's five-megapixel camera, but indoor shots like the one above look pretty good. As for outdoor usage, the still camera either struggled with the white balance or consistently under-exposed the shots. Still, they are nowhere as bad as the videos recorded -- they're capped at a 352 x 288 resolution with a sad frame rate, and you'll get an even lower frame rate if you record in the dark. What a bummer.%Gallery-96129%


Well, we didn't have high expectation for the Wildfire to begin with, and having played with it we were even less stoked. In general, this handset's seriously lacking in multimedia features, and then we have the screen problem plus the occasional lag. That said, we can't really walk away hating the Wildfire in its entirety -- the battery life's good, plus it is after all a £230 ($346) device if bought off the shelf, or for free on T-Mobile's £20 ($30) per month two-year contract. In comparison, the Legend's about £360 ($542) SIM-free, but it's also available for free on Vodafone's £20 plan with significantly fewer minutes. Needless to say, your choice will greatly depend on your phone usage and carrier preference, but we'd gladly sacrifice some call time and go for the faster AMOLED-donning Legend. If you're looking for a basic off-contract Android smartphone but still want the Desire / Nexus One look, then the Wildfire's the way to go. You'd just quickly realize that you want more.
All products recommended by Engadget are selected by our editorial team, independent of our parent company. Some of our stories include affiliate links. If you buy something through one of these links, we may earn an affiliate commission.