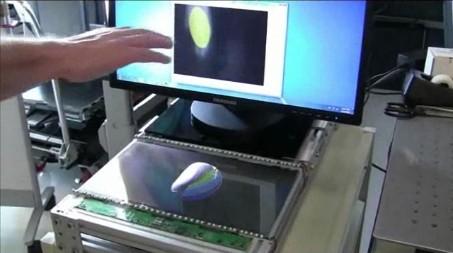 We've always wondered whether Microsoft's multitouch table would actually ever arrive, dreaming of Minority Report hijinx all the while, but after seeing what the company's Applied Sciences Group is currently cooking up -- a touchless telepresence display -- we'd rather drop that antiquated pinch-to-zoom stuff in favor of what might be Surface's next generation. Starting with one of Samsung's prototype transparent OLED panels, Microsoft dropped a sub-two-inch camera behind the glass, creating a 3D gesture control interface that tracks your every move by literally seeing through the display. Combined with that proprietary wedge-shaped lens we saw earlier this month and some good ol' Johnny Chung Lee headtracking by the man himself, we're looking at one hell of a screen. Don't you dare read another word without seeing the prototype in a trifecta of videos after the break.