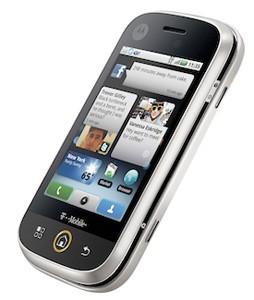 We've seen this coming for at least a week or two now, but for what it's worth, Motorola has now made it official that the CLIQ and CLIQ XT won't be seeing upgrades to Android 2.1 in the second quarter of the year (which ends today) as had been previously promised. That's certainly a bummer, especially considering that the devices run Cupcake, which is -- at this point, anyway -- a truly ancient iteration of the platform that many modern, popular Android apps don't even support (Donut seems to be a pretty popular cut-off point). So, when is it coming now? Hard to say; all Moto's saying is that it'll happen "as soon as possible" and that it's going to "take more time on the release to optimize the experience in some key areas." Droid X, anyone?

In this article: android, android 2.1, Android2.1, cliq xt, CliqXt, eclair, mobile, motorola, t-mobile, update, upgrade
All products recommended by Engadget are selected by our editorial team, independent of our parent company. Some of our stories include affiliate links. If you buy something through one of these links, we may earn an affiliate commission.
Share
Tweet
Share