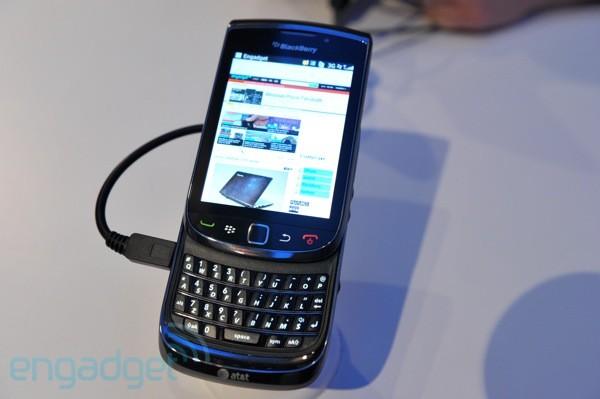 We just got a quick hands-on with the BlackBerry Torch -- unfortunately our unit wasn't powering on. We're headed back for more in just a second and there's video on the way, but check the gallery for some hardware shots and some Droid X / iPhone 4 head-to-head action right now!

Update: We went back in for round two with a functional device -- the hardware is quite nice, and the keyboard feels similar to the Tour / Bold. Software-wise, we're still waiting to play with BlackBerry 6 in-depth, but it definitely feels like the OS overwhelms the hardware a little when it's really cranking -- for example, the phone basically locked up while it loaded Engadget in the new Webkit browser, but when it was done loading it responded smoothly to panning and zooming.

Update 2: We've got video, people. It's a little scattershot in scope, but it should illustrate the basic feel of the new OS. You can find it below the fold.

In this article: 9800, att, blackberry, blackberry torch, BlackberryTorch, breaking news, BreakingNews, rim, torch, video
All products recommended by Engadget are selected by our editorial team, independent of our parent company. Some of our stories include affiliate links. If you buy something through one of these links, we may earn an affiliate commission.
Share
Tweet
Share