J. Stern
August 5th, 2010
In this article: amd, amd athlon ii, AMD Athlon II dual-core, AmdAthlonIi, AmdAthlonIiDual-core, dell, Dell Inspiron, Dell Inspiron M101z, DellInspiron, DellInspironM101z, inspiron m101z, InspironM101z, M101z, notbook, review
We've been having a hard time figuring out what to call the recent influx of 11.6-inch laptops -- you know, the ones which are slightly larger and more expensive than netbooks, yet pack more than double the graphics and performance power. But regardless of what we call them – we're thinking notbooks -- the new category certainly has been building steam by the day, and we can't help but think Dell's new Inspiron M101z could be our favorite yet. Yes, unfortunately, our review unit was adorned in that bright pink color above that's most likely causing your eyes to tear, but don't let its sissy exterior fool you -- it's powered by AMD's new dual-core Athlon Neo II processor, 4GB of RAM, and a 320GB 7,200rpm hard drive. Yep, she's a heartbreaker on paper, but hit the break to find out if the $579 M101z is in fact a worthy companion. %Gallery-98872%
Dell 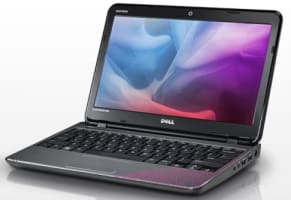 For whatever reason, Dell sent us the "Promise Pink" version of the M101z. While it's nice that some of the proceeds of the particular model go to the Susan Komen Foundation for breast cancer research, the almost florescent color and matching swirly pink pattern that finds its way onto the palmrest just wasn't our thing. We tried to call Molly Ringwald and pawn it off on her, but we just couldn't get in touch. We could make pink laptop jokes all day, but more importantly, in usual Dell fashion it's available in three other colors: black, red and blue.

The wedge-like or doorstop chassis design of the M101z is very similar to that of the new Inspiron 14R and the Mini 10. It's thicker than most laptops, but that's because Dell has integrated the battery into the design so it doesn't bulge from the back. It's an interesting move, but it does result in making the rear of the system measure 1.5 inches thick; the 11.6-inch Acer Aspire 721 and Lenovo IdeaPad U160 are .4 inches thinner. Still, at 3.4 pounds it's not too large of a burden, and it was easy enough to pop into a purse (that's where a pink laptop belongs, right?). One of the first things we did notice about the M101z was its solid build quality. While it's made of plastic, it feels noticeably stronger and more durable than the aforementioned Acer Aspire 721. Surrounding the machine are three USB ports, an SD card reader, HDMI, Ethernet, VGA, microphone and headphone jacks. There's a port for a TV tuner, but Dell actually tells us the unit won't be sold with this option.

In the past we've knocked Dell's keyboard and touchpad designs, but the M101z changes that tradition. Like every other laptop manufacturer, Dell shifted over to a chiclet style keyboard, and the rounded, black matte keys provided a very comfortable home for our fingers. There's no flex to the panel and the deck was incredibly roomy for a machine of this size.

We're thinking of treating the Dell employee responsible for the touchpad on the M101z to a steak dinner since it doesn't have the very uncomfortable and flaky integrated mouse button setup like the Mini 10. The smooth, silver pad is flush with the palmrest, but the material isn't too slippery and navigating was a pleasant experience. The right and left mouse buttons are ever so mushy, but still comfortable. Also, two-finger scrolling was extremely responsive in Firefox, but pinch-to-zoom was disabled out of the box -- we can't say we were all that tempted to enable it.

Dell's placed the 11.6-inch display on top of the keyboard, and claims the hinge design brings the screen "closer to you." It's nice to have the screen propped up a bit, but it means not being able to tilt the screen beyond a 120 degree angle. The glossy, 1,366 x 768-resolution screen itself is bright, and vertical viewing angles were decent when sharing the screen with a friend. On the other hand, horizontal angles weren't as good, and standing back from the screen caused a bit of color distortion. Firing up La Roux's "Bulletproof" in iTunes had us surprisingly impressed with the two speakers located on the bottom of the laptop. We could hear the song from across a large room with volume at 50 percent. Dell said it had made some enhancements to the audio, so whatever the company did, it paid off.

For the first time in a long time Dell's using AMD parts, and the performance is impressive. Though Dell will offer a $449 version of the M101z with a single-core AMD Athlon II Neo K125 processor, 2GB of RAM and a 250GB, 5,400rpm hard drive, we were sent the higher-end $579 model that boasts a dual-core Athlon II K325 CPU, 4GB of RAM, and a 320GB 7,200rpm hard drive. Sure, for $579 you can get faster and larger mainstream laptops, but the M101z is a fast little laptop. The dual-core processor obviously bested the single core version on the benchmarks, but it also felt snappier in everyday use. It kept up with our heavy Firefox use, writing in Microsoft Word, and chatting in Digsby. It also managed to stream a 1080p video amidst that all -- even after days of rest, no Atom processor can attempt such a feat.

The lovely 1080p video playback also has ATI's Mobility Radeon 4225 graphics to thank. The integrated solution not only performs better than the Lenovo IdeaPad U160's Core i7 / Intel GMA 950 graphics, but also tops some with NVIDIA's last generation Ion platform. Along with those loud speakers, watching Katie Perry and Snoop's "California Gurls" music video was eye-pleasing. It played just as well when we hooked up the laptop to a 40-inch HDTV via HDMI. Even when streaming that HD YouTube video, the chassis remained relatively cool – the left fan was working pretty hard, but at no point did our lap get overly hot.


While AMD's improved the thermals, we still can't say we're thrilled with the battery life of the new platform. The 56Wh six-cell battery lasted for 3 hours and 35 minutes on our video rundown test, which loops the same standard definition movie with brightness adjusted to 65 percent. In normal usage – surfing the web and listening to music – we got close to four hours and 15 minutes of endurance. That's longer than Lenovo's Core i7-powered U160 and in line with what we saw from the Aspire One 721, but it's still not great for any ultraportable laptop. We're still waiting on a mobile platform that provides an all around great blend of graphics, performance and endurance.

The M101z boots a completely barren Windows 7 Home Premium desktop. However, a few seconds later it loads Dell's dock loads with shortcuts to Internet Explorer and other preloaded Microsoft and third-party applications. Other than that, the preloaded software is really limited to Skype, Cozio and Syncables.

It took us a while to look beyond the M101z's pink shell, but when we did we came to really like the little guy. Er, girl. Of all the 11.6-inch machines we've reviewed lately, it provides the best combination of build quality, performance and graphics capabilities for the price. (We should note, a similarly configured HP Pavilion dm1 costs about $100 less, but we haven't reviewed it yet). Sure, it's a bit thicker than the others (and we still can't help but be disappointed by AMD's power-thirsty platforms), but if you can deal with only four or so hours of juice, then the M101z won't disappoint those looking for a... well, we still don't know what to call the category.
All products recommended by Engadget are selected by our editorial team, independent of our parent company. Some of our stories include affiliate links. If you buy something through one of these links, we may earn an affiliate commission.