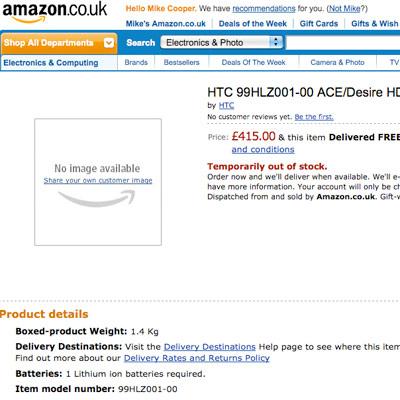 And this, folks, pretty much seals the deal. If HTC bothers to not ship the Desire HD, it'll come as quite the surprise. You know -- given that we've seen leaked specifications, an image from Mr. Blurrycam and even a behind-the-scenes video of it. Now, however, we've got a product listing on Amazon's UK branch to focus on, which prices the handset at £415 ($650). The only other detail gleaned from the page is the "Ace" codename, but given that the whole thing has since been yanked, it's impossible to know what else was hidden in the code. Still, we highly doubt HTC would bother passing on phone information to Amazon with no intention of ever officially introducing it, you know? Yeah, you know.
In this article: amazon, Desire HD, DesireHd, for sale, ForSale, htc, htc Desire HD, HtcDesireHd, on sale, OnSale, rumor, smartphone, uk
All products recommended by Engadget are selected by our editorial team, independent of our parent company. Some of our stories include affiliate links. If you buy something through one of these links, we may earn an affiliate commission.
Share
Tweet
Share