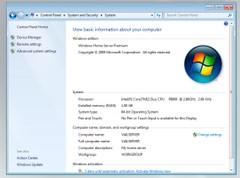 It's not the biggest of releases, but progress is progress at this point. Since launching in late April, Microsoft has been rather mum on the future of its latest Windows Home Server build. This week, however, the second major beta release has been let loose into the wilds, with Vail's most recent build now available to download there in the source link. The Big M doesn't go into great detail on what all has been added and / or changed, only saying that this new version has "plenty of enhancements and improvements over the original." The so-called "Preview" also adds support for Mac OS X backups, though users should know that storage check and repair (among other things, most likely) aren't exactly working seamlessly. But hey, that's what you get for living on the beta, right?

In this article: 64-bit, apple, Aurora, beta, download, mac, mac os x, MacOsX, microsoft, now available, NowAvailable, operating system, OperatingSystem, OS, os x, OsX, sdk, server, software, Vail, video, WHS, Windows Home Server, WindowsHomeServer
All products recommended by Engadget are selected by our editorial team, independent of our parent company. Some of our stories include affiliate links. If you buy something through one of these links, we may earn an affiliate commission.
Share
Tweet
Share