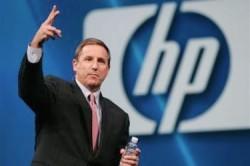 Hey, remember when HP fired former CEO Mark Hurd for fudging his expense reports in connection with some shady potential hanky-panky surrounding a former marketing contractor? And then gave him a $40-50m severance package that included $12m in straight cash to keep his mouth shut and not sue anyone? And then Oracle CEO Larry Ellison called HP's board "idiots" for firing Hurd? Well, over the weekend Larry put his money where his mouth is and hired ol' Mark as Oracle's new president, and that seems to have been the last straw for HP -- the company just announced that it's suing Mark Hurd for breach of contract and "threatened misappropriation of trade secrets."

HP says that Hurd was deeply involved in creating HP's business plans for the next two years, including specific plans to compete with Oracle in the enterprise market, and that there's no way Hurd can do his job at Oracle without revealing trade secrets and other confidential information he agreed to keep under wraps when he signed his employment contract with HP. What's more, he reaffirmed those commitments when he signed his severance package, so that's a double whammy -- and although California is usually pretty hostile to noncompete agreements, HP's trying to say Hurd violated one of those, too. HP's asked the court to prevent Hurd from working for Oracle or any other competitors at all, so we're guessing this one's going to be a fight -- we'll let you know if Larry Ellison says something bonkers again anything good happens.

P.S.- The WSJ piece linked in More Coverage says there's no noncompete agreement in play here, but we're reading the complaint and HP specifically references a protective covenant forbidding Hurd from working for a competitor under certain conditions -- that certainly looks like a noncompete clause to us.

In this article: breaking news, BreakingNews, hp, larry ellison, LarryEllison, lawsuit, legal, mark hurd, MarkHurd, oracle
All products recommended by Engadget are selected by our editorial team, independent of our parent company. Some of our stories include affiliate links. If you buy something through one of these links, we may earn an affiliate commission.
Share
Tweet
Share