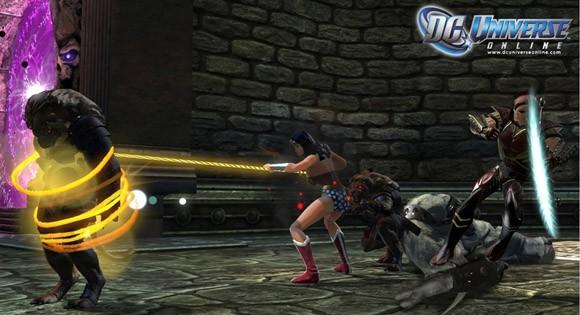 With the launch of DC Universe Online just around the corner, we're starting to see a bit more information revealed about Sony Online Entertainment's superhero extravaganza. Gamespot reports on its lengthy hands-on at SOE's Austin development studio; highlights include a quest chain in the city of Metropolis as well as observations on the game's RPG and gear mechanics.

Fan website DCUO Source also contributes some interesting info in the form of a collation of comments from the game's Facebook site. Ordinarily, reader comments regarding teaser videos aren't anything to write home about, but the fact that SOE's Jens Andersen chimed in to answer questions provides some interesting reading.

One exchange that seems particularly noteworthy is Andersen's response to a fan concerned with the lack of information on DCUO's character customization options. "Character creation will be ongoing throughout the game with our appearance collection system and real items with stats forming a great fusion between form and function," Andersen says. "This means less choices upfront but more meaningful ones as you go through the game. It's a far cry from starting in rags and a loin cloth like in fantasy MMO's but it also isn't a fluff fest of everything which takes away the impact of getting cool stuff in games you can show off to your friends," he writes.

In this article: batman, dc-comics, dc-universe, dc-universe-online, dcuo, gamespot, gotham-city, im-batman, impressions, jens-andersen, lex-luthor, metropolis, soe, Sony-Online-Entertainment, superhero, superman, the-flash, wonder-woman
All products recommended by Engadget are selected by our editorial team, independent of our parent company. Some of our stories include affiliate links. If you buy something through one of these links, we may earn an affiliate commission.
Share
Tweet
Share