T. Stevens
September 13th, 2010
In this article: 1080p, feature, featured, features, lifecam, lifecam studio, LifecamStudio, microsoft, review, video, webcam
The 1080p webcam party is just getting started, Logitech kicking things off with the $99 C910 earlier this year, and now things are heating up with Microsoft making its appearance. Today the company is announcing the immediate availability of the $99 Lifecam Studio, an upgraded version of the LifeCam Cinema HD that's pushing more pixels and a few other nice features, like a threaded receiver for tripod use. Overkill, or is this the webcam you want? Click on through to find out.
%Gallery-101865%
Microsoft 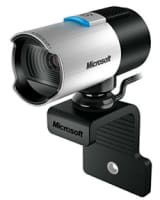 
As webcams go, the LifeCam Studio is certainly a looker. It borrows the barrel styling from the 720p Cinema HD, replacing some plastic with metal and growing an extended shroud that pledges to keep unwanted light from creeping in through the top and bottom. The flexi mount is also upgraded, now featuring a threaded receiver to make this tripod-ready. Finally, footage is shot through a new glass lens that promises higher picture quality.

Naturally, though, the big change is a new 1080p sensor that not only offers more pixels but is physically twice as large as the earlier model's 720p sensor. To borrow a tired cliche, size does matter in this case, with a bigger sensor equaling more light captured. On the top is the microphone, slightly less pronounced than the one on the Cinema HD, and a button that lets you get on with the video chat pronto.

Out of the box the Studio comes with a software suite that enables tuning the cam's settings (full manual control is available) plus recording video or capturing snapshots. Naturally there are a number of goofy effects on-offer here that can make you look like an ogre or a big-eyed alien, but what you sadly cannot do is record at 1080p. Through Microsoft's software you're capped at 720p, though it will let you take a 1080p photo -- whatever that is.

The story is much the same through the Live Messenger Beta, which now offers high-definition video chat. Quality looked generally good in our tests, increasing and decreasing dynamically based on the connection quality, but again maxing out at 720p. To actually use all those pixels in there you're going to have to use some other piece of software to control the camera -- but not SkypeHD, as this cam isn't compatible. (And won't be until Skype drops its requirement for integrated video compressors.)

However, even capped at 720p we were quite impressed with the quality. Images are bright and colorful despite dim and gloomy lighting, and while we can't say for sure whether that's thanks to the larger sensor or the integrated TrueColor tech, we can say the difference is noticeable compared to the competition. The microphone, however, seemed to pick up much more background noise than the Logitech C910 we tested it against here, but we'd say that's likely due their relative locations: top-mounted on the Microsoft, front-mounted on the Logitech.

At $99 the LifeCam Studio is among the most expensive consumer webcams out there, but compared to the immediate competition, Logitech's C910, it appears to be a better choice. Video quality in average lighting conditions is noticeably better and, while the Studio does pick up more background noise, depending on your situation (like swiveling the camera around in a room full of people) that could actually be a positive. That the thing is capped at 720p in most cases is a real disappointment, but we're still not sure we need 1080p out of a webcam anyway. Feel free to call us old fashioned.