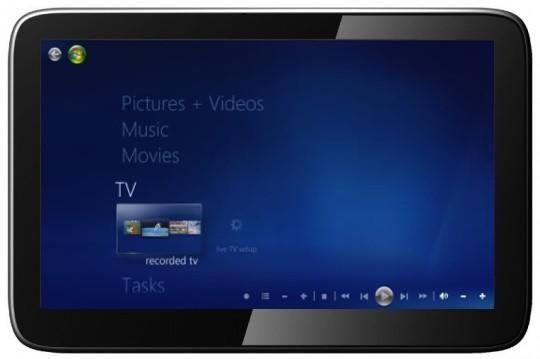 It's no secret that Microsoft has a slight tablet, err Slate PC problem on its hands: Windows 7 certainly works on a "pad," but the user interface isn't meant for strictly finger input. The makeshift solution has been, of course, for its partners to create software skins of their own -- see HP TouchSmart UI, the ExoPC "Connect Four" skin, etc. -- but according to Microsoft know-it-all Mary Jo Foley of ZDNet, the guys in Redmond may just be working on a layer of their own. Now, Foley says these are just recurring rumors at this point, but they happen to line up with similar whispers we've heard that Microsoft might develop its own optional "shell." Foley actually believes that it could be based on Windows Media Center, and points to an article by UK blogger Mark Wilson in which Ballmer is quoted saying, "what you'll see over the course of the next year is us doing more and more work with our hardware partners creating hardware-software optimisations with Windows 7 and with Windows 7 Media Center [...]." We don't need to tell you, Mr. Ballmer, that we think that sounds like a glorious idea, and it'll certainly buy you time until Windows 8 is ready in 2012.

Speaking of which, he also confirmed that it won't be releasing another version of Windows in the interim as some may have suspected. We've similarly heard that Microsoft is heavily optimizing the new OS for slates, and is already prepping its partners with information on that front. Obviously all of this should be taken with a grain of salt at this point, but we sure are happy to hear that Microsoft's starting to understand how important those UI layers are to consumer adoption and that the wheels may be in motion on finger-friendly interface improvements. Of course, for now we'll be sitting here twiddling our thumbs until next week's October 11 event to see if any elusive Microsoft slate announcements do in fact decide to make an appearance.
In this article: exopc, ExopcSlate, ExoPcUiLayer, mary jo foley, MaryJoFoley, Microsoft, slate pc, SlatePc, tablet pcs, TabletPcs, tablets, Tablets PC, TabletsPc, windows media center, Windows Media Center Edition, WindowsMediaCenter, WindowsMediaCenterEdition
All products recommended by Engadget are selected by our editorial team, independent of our parent company. Some of our stories include affiliate links. If you buy something through one of these links, we may earn an affiliate commission.
Share
Tweet
Share