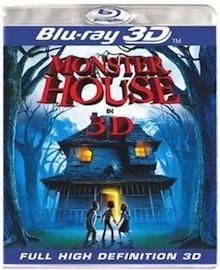 If your 3DTV and eyes are moaning from endless replays of the Cloudy With a Chance of Meatballs 3D Blu-ray, High-Def Digest says Sony's second 3D Blu-ray release, Monster House, can provide some relief. Besides gushing over the "spectacular" 1080p/AVC MPEG-4 transfer, they note that Sony has fixed the issue of background smearing and image ghosting present in the few other 3D Blu-ray titles out there like Cloudy and Monsters vs Aliens. The "impressive" DTS-HD Master Audio 5.1 soundtrack was also deemed a great improvement over the original Blu-ray release's English PCM 5.1 version. Combined with the refreshing lack of pointy-objects-in-your-face 3D gimmick shots and accurate color reproduction, they gave the title 4.5 out of 5 stars for both HD video and audio quality -- which certainly isn't kids stuff. Good news aside, it probably won't make up for the scorn of Pansonic's Avatar exclusive for those using LG, Sony or Samsung gear, but then again, you can always just rent Dances With Wolves if you just need to belong. To read the full review, hit the source link below.