17" unibody MacBook Pro deliveries not as speedy as hoped

How much will it cost to replace your 17-inch MacBook Pro battery? 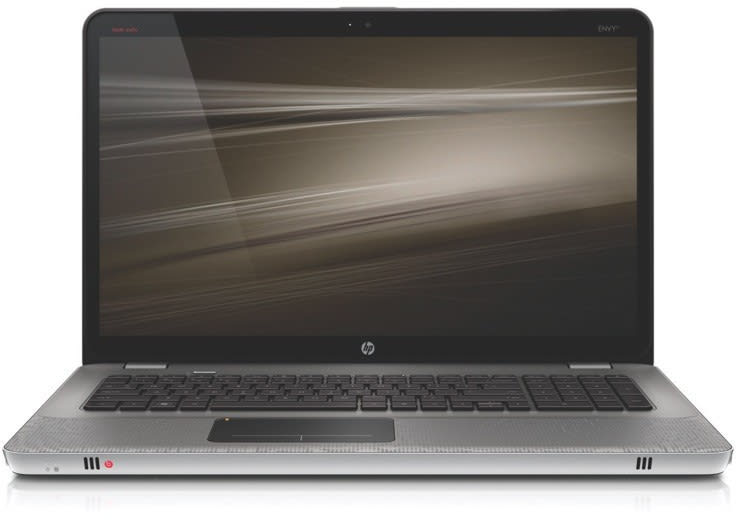 When it comes to selecting our favorite mainstream Windows laptops these days the HP Envy 14 is pretty much at the tippy top of the list. (Hey, we don't just give anything away to our college-bound readers, you know?) But while the 14-inch version of the magnesium-alloy laptop may have impressed us with its new backlit keyboard and internal organs, we've still been aching to know how the bigger and badder Core i7-powered Envy 17 stands up. With a 1920 x 1080-resolution 17.3-inch display, 1GB of ATI Mobility Radeon HD 5850 graphics, a USB 3.0 port and Blu-ray drive, can you really blame us? There's no doubt that the Envy 17 is one epic desktop replacement, but for $1,599 (the starting price is $1,299) we've got to tell you you're not purchasing perfection. Just what holds back the Envy 17 from being the be-all end-all multimedia monster? We'll divulge all in our full review after the break. How would you rate the Envy 17?
We want to hear what you think. Post a quick review now to join the conversation!
Write a review

Those familiar with the other Envy laptops won't find the 17 to be all that unique in terms of design, but that doesn't mean we're tired of the line's magnesium alloy chassis, etched lid, and aluminum edges. How could we possibly get sick of one of the best looking laptops out there? Like the Envy 14, the overall manufacturing quality is top notch -- the metal hinges keep the screen from wobbling and the metal palmrest feels solid to the bone.

Sure, the Envy 17 has the same look and feel as its smaller 14-inch brother, but it could also eat the 14 for breakfast in terms of size. The laptop's 17.3-inch display is stunning and provides a ton of screen real estate (we'll get back to that soon), but it also makes it a mother of a system in terms of pure measurements. Like most desktop replacements, we suggest keeping the 10.8 x 16.4x 1.5-inch / 7.5-pound machine under one roof -- we dragged it and its 1.5-pound power brick home from the office and our shoulder sure wasn't happy about it. If you're looking for a thinner and lighter 17-incher, the 6.6-pound MacBook Pro 17 is definitely trimmer, but most others hover around the same size as the Envy.

The extra edge space makes for a whopping array of ports -- the left side is home to VGA, Ethernet, Mini DisplayPort and HDMI ports along with a combo eSATA / USB 2.0 socket, an even faster USB 3.0 port and two headphone ports. Two additional USB 2.0 ports live on the right edge along with the system's 5-in-1 card reader and slot-loading Blu-ray drive. That should be enough to keep all your peripherals powered at the same time, or you know, power three monitors simultaneously (thanks Eyefinity!).

The Envy 17's wide chiclet keyboard has been kept intact and still has a dedicated number pad. As we said in our review of the Envy 14, the keys have a bit of a rubber feel to them and just the right amount of bounce. We typed the entirety of this review on the panel at a very brisk pace with very few typos. The major addition to the panel is obviously the backlight, which can be turned on and off, but not adjusted like on the MacBook Pro line.

Here's a shocker: we're not fans of the 17's touchpad. Come on, you're not surprised are you? HP's still using the enlarged ClickPad on the Envy 17, and we actually found it to be more frustrating to use on this version than on the Envy 14 -- even after we updated to latest drivers. If our finger slipped over the left mouse button line, it would cause the cursor to jump to another part of the screen, and at times we'd notice the mouse just not moving when we told it to. Ultimately, the pad is large and smooth, but we wish at this point HP would just go back to using a regular touchpad with dedicated right and left buttons. Was there really anything wrong with those? As for the multitouch gestures, pinch-to-zoom was responsive in most applications, but scrolling is still a crapshoot.

That brings us to our favorite part of the Envy 17: its edge-to-edge glass, 1920 x 1080-resolution, 17.3-inch BrightView display. Maybe it's that we've gotten so used to 13- and 15-inch laptops, but the extra screen space is much appreciated for keeping multiple windows scattered around while working and then closing them down to watch a movie in true HD on Blu-ray. Speaking of which, that high definition experience on this rig is nothing short of magnificent -- we queued up Sweeny Todd on the big screen and we were immersed in the crisp quality of the Tim Burton's world. The visual experience is met with an equally impressive audio one; the two speakers on the front lip of the machine blasted out one of the movie's musical numbers -- "By The Sea" to be precise -- quite loudly. HP's makes the system's Beats Audio no secret -- there are logos on the front lip and the top bezel -- however, you'll really only reap the benefits of the enhanced audio when you plug in an external set of speakers or headphones. We should also note here that this is one of the first laptops in a long time that we didn't totally beat up on for having terrible viewing angles; the panel is incredibly glossy, but the quality is really a notch above most out there.

The Envy 17 that landed in our "lab" was configured with a 1.60GHz Intel Core i7 Q720 processor, 6GB of RAM, a 500GB 7,200rpm hard drive, and 1GB ATI Mobility Radeon HD 5850 graphics. It's a powerhouse of a machine, and it can be built with even more muscle as it can be spec'd out with up to 8GB of RAM and faster Core i7-740QM or Core i7-840QM processors. Obviously, the entire package provided more than enough power for our everyday computing activities and then some. No matter what we threw at it, it seemed to keep up -- for instance, simultaneously running Photoshop, a Blu-ray disc in Roxio, and Batman: Arkham Asylum didn't even handicap the system.

Graphics-wise, it was equally nimble. We do wish there was an integrated GPU for saving battery life (you'll be hearing about that soon), but the performance numbers of the Radeon HD 5850 just speak for themselves. Besides pushing along HD content flawlessly, it rocked Batman at 37fps and the demo version of Mafia II at 34fps. We wish we could put the gaming experience into words, but it's almost too captivating to describe. You really just have to fire up Mafia II and drive over the Brooklyn Bridge in a Smith Thunderbolt to meet other high-res Italian mobsters yourself to understand it. Our only complaint about the experience was that the palmrest / center of the keyboard heated up quite a bit after about five minutes of playing, but a warm wrist wasn't enough to stop us from reuniting Vito with his mobster buddies.

Those heavy performance parts and the large screen take a serious, and we mean serious, toll on battery life. The six-cell battery lasted only two hours and 10 minutes on our battery rundown test, which loops the same standard definition video. Now, we do assume you won't be moving around with the rig all that often and you can always pick up the nine-cell battery for an extra $75, but we're still disappointed that you won't be able to finish a full movie before having to string the rather massive AC adapter across the room.

As for preloaded software, HP's done a stand up job keeping the desktop clean, but the Envy 17 still comes loaded with HP's Dock and an assortment of other software, including Hulu Desktop, Adobe Premiere Elements, Barnes & Noble's Desktop eReader, and Roxio's CinemaNow. Like most HP machines, Internet Explorer 8 is wallpapered with toolbars, though we installed IE9 Beta early on in our testing. You can also boot the system directly into HP's QuickWeb OS, but why you'd ever want to do that on a desktop replacement that takes another 25 seconds to boot into a 64-bit version of Windows 7 Home Premium is seriously beyond us.

Nope, HP's Envy 17 still isn't the perfect desktop replacement -- the touchpad is still a bit finicky and it can get a bit warm during graphics intensive activities -- but like the Envy 14, it comes pretty darn close to it. If you can live with those shortcomings, and our guess is that you can by picking up an external mouse, the 17.3-inch rig is bound to keep you procrastinating -- whether with games, glorious sounding tunes or stunning HD movies -- for a very long time. Obviously, we speak from experience.
In this article: 17, core i7, CoreI7, desktop replacement, desktop replacements, DesktopReplacement, DesktopReplacements, envy, envy 17, Envy17, gaming laptop, GamingLaptop, hp, HP Envy, hp envy 17, HpEnvy, HpEnvy17, intel core i7, IntelCoreI7, laptop, laptops, review
All products recommended by Engadget are selected by our editorial team, independent of our parent company. Some of our stories include affiliate links. If you buy something through one of these links, we may earn an affiliate commission.
Share
Tweet
Share