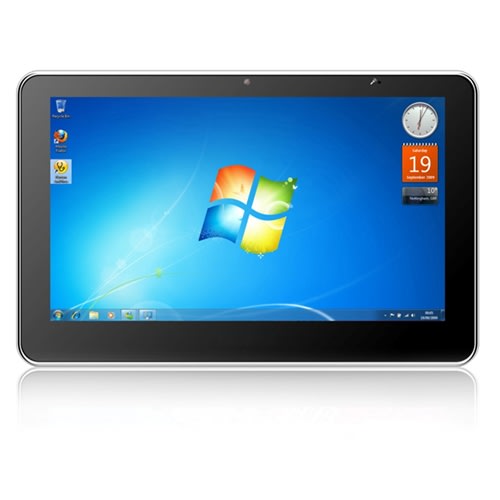 Last time we left off in the tale of Windows 7 tablets, we'd taken a look at Netbook Navigator's Nav 9 slate, which by review's end had us not only wanting to send it back as soon as humanly possible, but concluding that something better just had to be on the horizon. Well, as luck would have it, just a few days later CTL's 10-inch 2goPad SL10 showed up on our doorstep with some very promising ingredients -- a capacitive touchscreen, accelerometer, front facing camera, and a Win 7 software layer. As we said in our early hands-on, we've been more impressed with the $499 (it will go up to $599 in late October) 2goPad than we ever thought we would be, but ultimately its Atom N450 processor and its software stand in its way of being the Win 7 tablet to kill 'em all. You'll want to hit the break to read all about it in our full review.

Be the first to review the 2goPad SL10?
Your ratings help us make the buyer’s guide better for everyone.
Write a review

If you can get past the chrome and rather bling-like "2goPC" logo on its screen bezel, the SL10 isn't a bad looking piece of hardware. The edge-to-edge glass screen is reminiscent of the iPad and gives it a higher end look, but instead of an aluminum back, its edges and rear are coated in a rubber-feeling plastic. That happens to make the tablet comfortable to hold in hand, but the soft material can't make up for the fact that the size and weight of the device are still cumbersome.

At 0.72-inches thick and 2.6-pounds, the 10.1-inch slate is obviously heavier than the smaller 9.7-inch / 1.5-pound iPad and the 8.9-inch / 1.9-pound Nav 9, but it's even the chunkier than the 11.6-inch / 2.4-pound JooJoo and the 10.1-inch / 1.9-pound Tega v2. (The latter actually just landed in our newly erected tablet testing laboratory and is pretty slim for a Win7 tablet). As we've said previously, we think 7-inch devices are an ideal size for two-handed navigation -- the 10-inch 2goPad is best used when propped up in its included pleather case or against your thighs when lying in bed. Overall, the feel of the tablet is best described as really solid and certainly not cheap by any means. As for port selection, CTL's made room for two USB ports, an Ethernet socket, SD card reader as well as headphone and mic jacks. There's also a Mini VGA output; CTL kindly includes the adapter in the box.

Just like most netbooks out there, the 2goPad has a 1024x600-resolution, 10.1-inch display. The LCD is incredibly glossy (thankfully, it comes with a large cleaning cloth), but the actual quality isn't as bad as we expected it to be -- it's no IPS display, but the viewing angles aren't nearly as horrific as the ones we experienced on the Nav 9. (Yes, we're still recovering from that one!) With the tablet slightly tilted off-axis we were able to watch a few YouTube clips with little color distortion, and found the screen to be sufficiently bright. With that said, more pronounced horizontal viewing angles can be quite bad -- when set flat on a table it was hard to make out images in the Top 5 box on this very website. There's also an ambient light sensor on the bottom left bezel.

Obviously, your biggest question right now is how is that touchscreen? Well, it's pretty much your standard capacitive display, which after working with the resistive screen on the Nav 9 is a total breath of fresh air for certain activities. Light taps and swipes is all it takes to make selections / scroll down pages. It also supports two points of input, so pinch-to-zoom worked quite well in Windows Photo Viewer. However, because Windows 7 wasn't necessarily built for finger navigation, we have to say there were times that we wish the tablet came with an active digitizer and a stylus, like that on the TouchSmart Tm2, for navigating through tighter menus. (We actually did test out the oStylus with this tablet, but found it really hard to use, not to mention it's terrible for handwriting recognition). CTL compensates slightly for that aspect of Windows navigation with the four touch buttons located to the right of the display -- you can use the up / down arrows to maneuver through narrow menus and then hit the "OK" button to make selections. The placement of the buttons is a bit odd, and at first we kept mistakenly hitting them, but we got used to it after awhile and actually put them to good use. There's a tools button as well that brings up a settings menu, which allows for easy access to the brightness, volume and camera controls.

Speaking of which, the 1.3 megapixel front-facing camera took some crisp shots of our mug and allowed us to do a two-way Skype call, where apparently we appeared clear and well-lit. Thankfully the tablet has a four-way accelerometer, which adjusted the orientation at a decent pace; it takes about 1.5 seconds for it to rotate, though the screen annoyingly turns black in between adjustments.

Of course, that touchscreen is only as good as the software that lies beneath it, and in the case of the 2goPad you're really dealing with "stock" Windows 7 Home Premium. Out of the box, CTL has configured the system to start-up its QuickBit's software overlay, and while upon first glance it's a nice shortcut menu, that's really all it is. We're into the animations of the software (when you click a shortcut it does a cute little flip), the ability to tweak the background color, and the option to customize what shortcuts appear, but there's no added software that allows you to take advantage of the touch capabilities. For instance, there's no drawing apps or even Microsoft's Surface Touch pack, like we've previously found in other skins like HP's TouchSmart overlay. Beyond that, we found it to be a bit sluggish to page through the other shortcut tabs. Don't get us wrong, it's certainly better than nothing -- we just wish there was more there in terms of applications and core functionality.

Beyond QuickBits, you've got all the robustness and capabilities of Windows -- which we're not sure is a blessing or a curse when it comes to it being on a slate like this. We spent most of our time with the device surfing the web in Firefox, watching clips on YouTube, checking our Twitter stream in TweetDeck and reading a bit in Kindle for PC. All of those experiences were fairly pleasant on the device, though we did find ourselves mistakenly hitting commands with our fingers in some spots as those third party programs weren't built for finger navigation either. (We actually see the point of a Windows touch app store of some sort for that reason alone.) On a productivity end, we were fine using the on-screen keyboard for inputting URLs or firing off a quick tweet, but it's hard to position it correctly on the screen in horizontal mode, and then when flipped vertically the keys are rather cramped. Also, it doesn't always pop-up when you need it to in third party software, like Firefox or Tweetdeck. If you're looking to transform the tablet into a productivity system, you're best picking up and pairing a Bluetooth keyboard.

The SL10 is pretty much a netbook sans the keyboard half, and is outfitted with a 1.66GHz Intel Atom N450 processor, 2GB of RAM and a 250GB hard drive. As you would expect, it was capable of handling web surfing and standard definition video playback, but throwing a 720p YouTube clip on caused a large amount of stuttering. An episode of 30 Rock on Hulu played back smoothly within the window, but upping it to full screen caused some pauses. Also, as we mentioned above, the animation-heavy software was slow to load and transition to other panels. We also noticed the system stalling periodically -- we'd attempt to launch the battery manager or another desktop shortcut and it would take a few seconds for it to recognize the command. We're inclined to blame the underpowered processor here, but it could also be a combination of the touch and performance parts. Surprisingly, the tablet and its spinning 250GB hard drive didn't get all that warm during use. It stayed rather cool, but the fan noise that projects from the left side vent is noticeable.

We're going to start to sound like a broken record across these Atom-powered tablet reviews when it comes to the battery life, as the processor in combination with three- or four-cell batteries (in this case four), can't find the strength to churn out more than three hours of runtime. The 2goPad lasted only two hours and 11 minutes on our video rundown test, which loops the same standard definition video at 65 percent brightness. In our regular use of the tablet -- surfing the web and listening to music -- we got close to about 3 hours of runtime. That's less than any netbook out there these days and significantly less than any ARM-powered tablet that we've tested. We're certainty looking to Intel's next generation Oak Trail to mend the endurance issues here, and our guess is that a number of the other manufactures out there are doing the same thing. Also, we should mention there's no way to swap out the battery or actually open up the back as far as we can tell.

To be honest, we're a bit torn on the 2goPad SL10. The basic capacitive touch experience is solid and stable, however its chunky size, somewhat useless Windows skin, and its fairly terrible battery life are glaring issues. Some of those things -- notably the size of the tablet and software -- can be mended, and we're hopeful that future products like the ExoPC, Tega V2 and even the HP Slate will provide better experiences in that regard. On the other hand, battery life is going to be a consistent issue with all of these Atom tablets, at least until Intel is ready to release Oak Trail in early 2011. And, well, that's why we're ultimately starting to feel as if now is not the best time to buy a Windows 7 tablet -- there are better internal organs and software (hopefully!) on the way. But look, if you are in search of a capable slate running Microsoft's OS and must have it right now, we do have to say the $499 SL10 is one of the more decent and affordable choices out there... just keep in mind, that isn't really saying much.
In this article: 2goPad, 2goPad sl10, 2gopadSl10, Atom N450, AtomN450, ctl, CTL 2go, CTL 2goPad, Ctl2go, Ctl2gopad, intel atom, Intel Atom N450, IntelAtom, IntelAtomN450, n450, review, sl10, slate, tablet, tablet pc, TabletPc, video, windows, windows 7, windows 7 tablet, windows 7 tablets, windows slate, Windows7, Windows7Tablet, Windows7Tablets, WindowsSlate
All products recommended by Engadget are selected by our editorial team, independent of our parent company. Some of our stories include affiliate links. If you buy something through one of these links, we may earn an affiliate commission.
Share
Tweet
Share