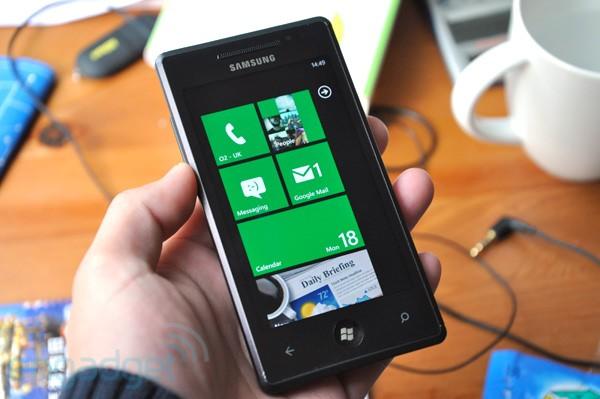 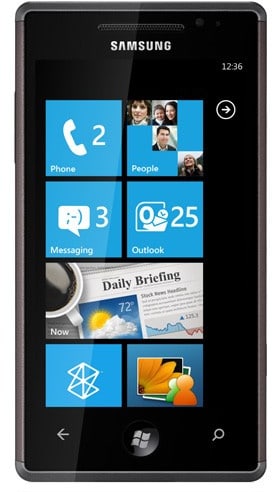 We knew Samsung's been in the Windows Phone 7 game pretty much since day one, but the Korean giant's managed to keep its Europe-bound Omnia 7 under tight wraps until mid-summer this year. Two months onwards, we find ourselves cradling this macho-looking device, and giggly flicking through the various tiles in its newborn OS. Just to freshen up your memory, we're looking at a 4-inch Super AMOLED-donning slate, garnished with a dash of Tyrian purple aluminum on the back, and capped with some dark gray polycarbonate at the top and bottom. Well, you know the drill -- join us after the break to find out how the rest of this phone fares.

This review is primarily of the Samsung Omnia 7 hardware. Check out our full review of Windows Phone 7 for our thoughts on the OS. How would you rate the Omnia 7?
We want to hear what you think. Post a quick review now to join the conversation!
Write a review

If you've been closely following the ever-growing army of Android handsets, you would've long noticed that the Omnia 7 -- along with its American cousin Focus -- is a very close relative of the infamous Galaxy S. How so? It's scribbled all over the paper: same 4-inch Super AMOLED screen, a 1GHz chipset (although a Snapdragon instead of Hummingbird), same 1500mAh battery (which lasts for about eight hours for our general usage), and the same 5 megapixel camera (except for the 720p recording frame rate, which has been lowered from 30fps to 25fps). Heck, the phones even share the same layout of two capacitive buttons sandwiching a physical home button below their screens. That said, there are two major differences that we must emphasize: unlike the slippery-plastic Galaxy S, the metal-wrapped Omnia 7 actually feels like it's worth the money; also, the latter lacks microSD expansion, thus stuck at 8GB of storage capacity for life.


Let's talk about ergonomics. From the front, the Omnia 7 doesn't appear to be a device that's hand-friendly, but there are two key ingredients that turn the game around: the tapered edges around the screen provide much comfort for our fingertips, whereas the back curves nicely above the heart of our palm. The polycarbonate volume rocker's well positioned for easy access with both left and right-handed operations, but then we noticed a problem: the power button on the top right side. Seriously, of all the places that it could be at, Samsung chose to put this critical button at where we're most likely to hit it by accident. Oh, and true story here: we managed to power down our phone in the middle of a phone call a couple of days ago -- the culprit was our left index finger. Even if we had used our right hand instead, there'd still have been a good chance for our right thumb to kill the phone.

Phew, rant over. It's mostly positive from now on as far as hardware's concerned -- we dig the slide cover over the micro-USB port at the top (which is also featured on the Galaxy S); the loudspeaker does a good job at blasting out music sans distortion; and that high-contrast Super AMOLED screen easily puts other LCD handsets to shame. No, really -- even though this isn't the first time that we've seen this vibrant display technology in action, and despite some minor trade-offs such as pixel density, we were still amazed by the staggering difference when comparing the Omnia 7 with the HD7 and Mozart. On top of that, we definitely love how WP7's black background blends in so beautifully with the screen's frame.

Moving on to the audio performance. We've already mentioned that the loudspeaker's pretty good, but of course, users aren't expected to blast out music wherever they go. If you fancy some music to yourself, the Omnia 7's bundled handsfree kit isn't too shoddy -- it's comfortable, comes with three sizes of sleeves, and has volume control on the remote. Here comes the not-so-good news: after some careful listening, we concluded that while these earbuds produce a fair amount of bass, there's a noticeable gap somewhere around the treble range. In other words, some vocals sound a bit muffed, and cymbals are less lively. Still, we had no problems with phone calls on either end.

Samsung's only thrown in a couple of in-house apps for its WP7 devices, so this bit of reading won't hurt your eyes too much. The first app goes by the name of "Now," and as you might have guessed, it's a combination of weather tool, news reader, and stocks tracker. There's really nothing to complain about said app's intuitiveness or its stability, but we will say this: it'd be even more awesome if we were able to add other news feeds, instead of being tied down to just one outlet (Reuters). What really troubles us, though, is the lack of a live tile for Now -- the tile in use currently just shows a static image of a weather icon and a stock chart on a newspaper; here's hoping that soon these will come to life and brighten up the homescreen.

Sadly, we didn't have much luck with Samsung's second app, Photo Sharing. From what we know, this piece of software lets you upload photos and share them online; however, since we reset the Omnia 7, we've never been able to go beyond the error message "Please insert SIM card" in Photo Sharing (and that's with the original SIM card inserted). So that's that. WP7 has SkyDrive, anyway, so we're not missing too much here.

Last but not least, we have the Omnia 7's 5 megapixel camera. All in all, we're very pleased with how the still shots turned out -- most had accurate color reproduction and just the right amount of sharpness. The one criticism we'll throw in is that regardless of the lighting condition, we've occasionally struggled to get the camera to focus properly, so some patience is required when using the phone's two-stage camera button. Alternatively, troubled owners can also experiment with various settings in the camera app, especially with metering, wide dynamic range, anti-shaking and ISO. In fact, we should point out that apart from metering, the HTC WP7 devices pack none of these useful options in their camera apps, which is a testament to HTC's weakness in camera optics. Anyhow, we'll save the bashing for our other reviews.

As for the phone's 720p video recording, we'd say picture quality's almost as good as the still shots, but we'd love to get a little boost for the 25fps frame rate. We've also noticed that for some strange reason beyond our knowledge, the camera's aperture changed incrementally rather than gradually as we panned around under the sun; this wasn't the case when we filmed at night, so we can only assume it was the lens acting up under strong light. See for yourself below.

Well, we've done our gushing, and it's obvious that we're in love with Samsung's Omnia 7. Simply put, this phone's got all the right hardware to qualify as a brilliant multimedia device in today's standard, plus its form factor feels great in our hands. Given the choice between this and the Galaxy S, we'd definitely choose the former for its more luxurious metallic construction; but then we'd sober up and realize that we're drooling over a young WP7 device, and any sensible joe would hold back until the market is ripe for harvest. Either way, out of the crop of launch devices, the Omnia 7 makes a great snorkel if you fancy taking the first dip into Redmond's renovated swimming pool. Now, where's Dell hiding its Venue Pro?
In this article: cellphone, GT-i8700, i8700, now, omnia, omnia 7, Omnia7, phone, photo sharing, PhotoSharing, review, samsung, samsung omnia 7, SamsungOmnia7, smartphone, snapdragon, super amoled, SuperAmoled, video, windows phone 7, WindowsPhone7, wp7
All products recommended by Engadget are selected by our editorial team, independent of our parent company. Some of our stories include affiliate links. If you buy something through one of these links, we may earn an affiliate commission.
Share
Tweet
Share