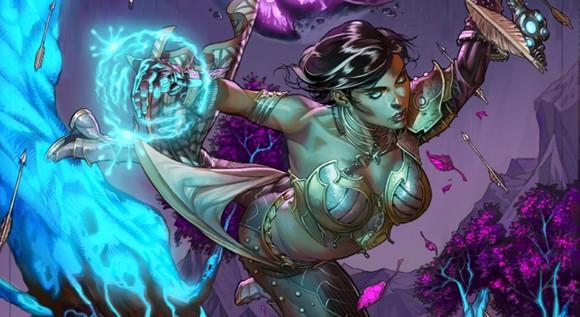 Trion Worlds' Rift: Planes of Telara publicity campaign is picking up a head of steam, and today marks an auspicious occasion for Rift fans who dig comic books as much as they do MMORPGs. In cooperation with noted comic publisher WildStorm, Trion has taken the wraps off another issue of the ongoing Telara Chronicles, a miniseries in four parts that tells the tale of a plane-touched warrior named Asha Catari.

Today's second issue finds Asha leading a band of Ascended warriors deep behind enemy lines to retrieve a mysterious and ancient artifact that may play a large role in Telara's future. The series is authored by Ricardo Sanchez and inked by Pop Mhan, with covers by Drew Johnson and Lizzy John. You can find a copy of the Telara Chronicles at your local comic shop.
In this article: asha-catari, comic, comic-miniseries, comics, miniseries, rift, rift-planes-of-telara, telara-chronicles, trion, trion-world-network, trion-worlds, wildstorm, wildstorm-comics
All products recommended by Engadget are selected by our editorial team, independent of our parent company. Some of our stories include affiliate links. If you buy something through one of these links, we may earn an affiliate commission.
Share
Tweet
Share