Surprise of surprises! On the day that Europeans finally got to dig into the Windows Phone 7 cake in earnest, Twitter's official app for the hot new platform has also gone live. We've downloaded it to our own WP7 device and are having a play around with it now. If you need a refresher as to what it looks like, check out the video after the break.

Update: Okay, we can neither log in nor get signed up at present, though others have clearly achieved the feat already. Twitter.com itself keeps alternating between its new and old versions, so we suspect there's quite a bit of work going on behind the scenes at present. To answer your queries, loading time from the live tile menu to the top tweets page above is approximately three seconds, while scrolling is basically identical to the perfection available on WP7's own apps. Swiping laterally gets you into Trends, Suggested, and Nearby categories which take a couple of moments to load up their tweets, but otherwise match the performance.

Exiting to the live tile menu throws you out of whatever you were doing and re-entering the app -- as is par for the Windows Phone 7 course right now -- means starting from scratch. The only way you can save you state is by locking the phone, which takes a second or two to resume when unlocked and returns you to the exact point you were at. Great, now let us in, Twitter!

Hold up, reader David Gordon points out that you can hit the live tile menu via the Windows/Start key and then return to Twitter through the Back button, yay, that works too.

Update 2: There are still errors being thrown up, but we finally got ourselves logged in. Well, it looks just like the vid promised it would and the app itself is working flawlessly, there are no processing delays that we can see. Oh, and there's a landscape mode. Our only bugbear is that there's no differentiation between your own tweets and those of your friends. Ah well, check out the gallery below. 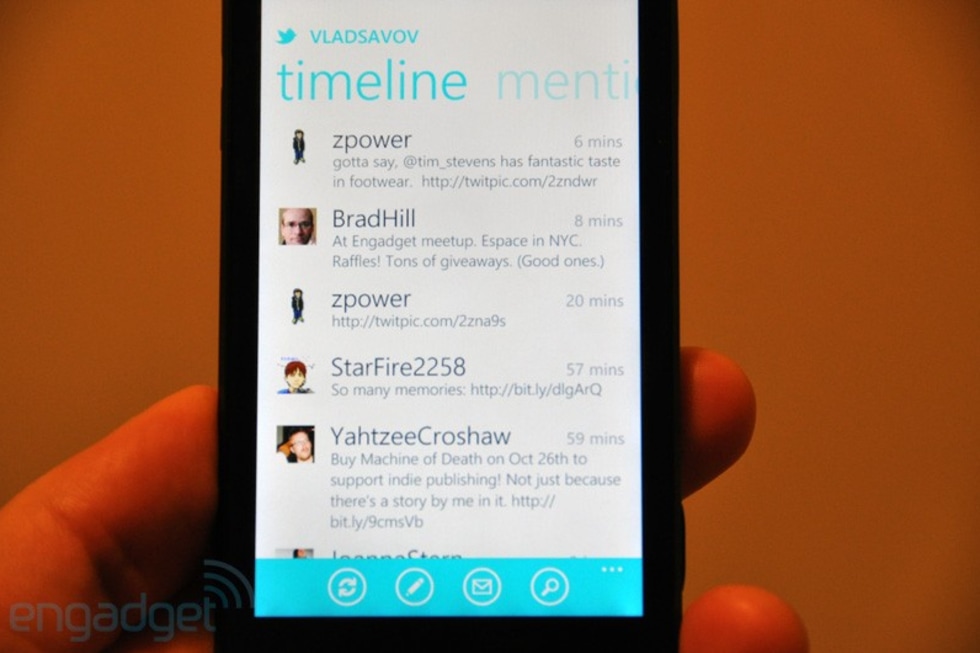 In this article: app, application, available, hands-on, launch, live, microsoft, official, twitter, twitter app, TwitterApp, video, windows phone, windows phone 7, WindowsPhone, WindowsPhone7, wp7
All products recommended by Engadget are selected by our editorial team, independent of our parent company. Some of our stories include affiliate links. If you buy something through one of these links, we may earn an affiliate commission.
Share
Tweet
Share