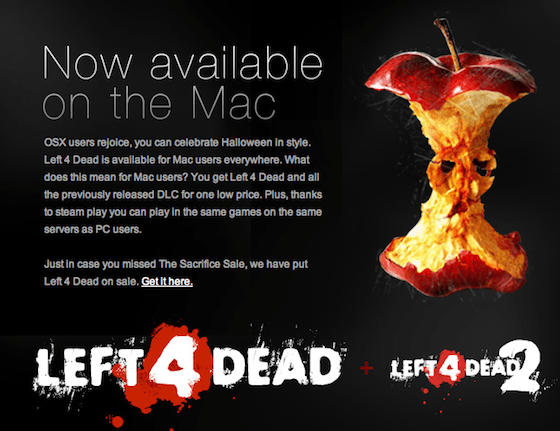 I just got done playing a level of Left 4 Dead 2 on my MacBook Pro when I saw this: Valve has released the original Left 4 Dead for Mac OS X. Valve originally released the sequel, Left 4 Dead 2, for the Mac on October 5th, promising the first one would come in time for Halloween. The reason for the delay? Valve was having a bit of a hard time making the original Mac-compatible. Late last night, Valve made good on their promise.

If you're a fan of zombies, the original Left 4 Dead is a blast. It's also a steal at just US$9.99 (a 50 percent discount in celebration of its release), but for an even better value, you can get both Left 4 Dead and Left 4 Dead 2 for just $14.99 for a limited time. If you already bought the game through Steam on a Windows PC, you should be able to play it on a Mac now without having to re-purchase it thanks to Steam Play.

In this article: gaming, l4d, left 4 dead, left 4 dead 2, Left4Dead, Left4Dead2, mac, steam, valve, zombies
All products recommended by Engadget are selected by our editorial team, independent of our parent company. Some of our stories include affiliate links. If you buy something through one of these links, we may earn an affiliate commission.
Share
Tweet
Share