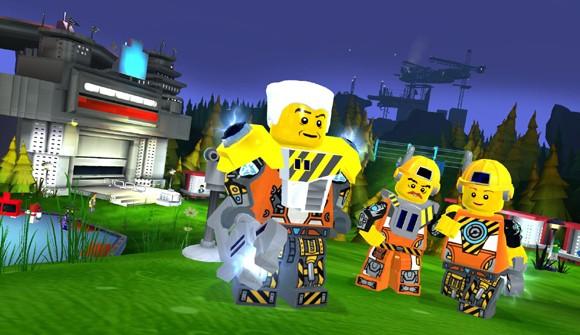 MMO Family is your resource for leveling a gaming-specced family, from tips on balancing gaming with family life to finding age-appropriate online games for everyone in the family.

Most kids who play video games have at least seen one from the LEGO franchise. There are a ton of them -- enough, in fact, for a whole page listing them. They're fun games; I'll bet you've played at least one of them, at least in bits and pieces in a demo somewhere. After all, who doesn't love LEGOs?

Still, there was a decided "ho-hum" reaction among my team of young playtesters when I announced we were going to test the ropes of the brand new LEGO Universe MMO. Oh sure, they were willing enough, but it seemed there was always something shinier and more appealing to play on any given day than the game about good ol' LEGOs.

Until they played LEGO Universe -- and had a (brick-)smashing good time.

Despite criticisms from many players that the newly launched LEGO Universe doesn't yet pack enough content, that players can race through the content, and that kids, its intended audience, may in fact be too unsophisticated to really explore the full spectrum of the building and creation options, LEGO Universe is, in a word, fun. It's definitely not an adult game on a kid-friendly chassis, but neither is it a children's game running on adult-sized rails. LEGO Universe is a full MMO that appears to have hit its intended audience squarely on their blocky, snap-on heads. When testing time was up, my kids wanted to keep playing.

How much does it cost? The game costs $39.00 plus a monthly $9.99 subscription. There are no further fees for additional features or items.

What's the game all about? In the LEGO Universe, the evil Maelstrom is sucking all the imagination from the world -- and it's up to you top stop it! You'll customize and develop your LEGO character "minifig" (minifigure) to reflect your personality as you battle against Maelstrom and its minions to save imagination.

What does the game look and feel like? LEGO Universe is all about story and character development; there are no XP or levels. Your character gets more powerful by acquiring stats and improved equipment, and the focus stays squarely on your character -- what he's wearing, what he can do, what he looks like. Character creation is a lot more fun than you might expect from a block minifig. You get to choose from quirky expressions and a whole wardrobe of eyebrows and lips and beards and mustaches; the process of spinning the selector carousel around and trying on various choices is fun.

The gameplay is typical of an MMO: combat, missions and an overarching storyline, quests to build things, racing ("PvP," against other players), puzzles, collecting and achievements, and platforming minigames. And since this is a kids' game, you don't "die"; instead, you get "smashed," after which you simply rebuild and try it again from a convenient safe point.

Customizing your character and housing is the real star of the game. Building requires you to collect blue orbs ("imagination") out in the game world. The possibilities are endless and possibly reach beyond the scope of the kids for which the game is designed -- a "good problem," indeed, for creative players.

Who's the target audience? We asked Ryan Seabury, LEGO Universe's creative director, for his take on exactly whom the designers had in mind when they built this game. "Kids 8 to 12 (boys and girls both) are definitely the 'sweet spot,'" he says. "While some game aspects are more popular with boys than girls (or vice versa), they weren't designed to be gender-specific. As you might imagine, boys really enjoy battle, missions and storyline, and girls really enjoy the social aspects (chatting with friends, meeting new friends, etc.), customizing and playing on their own personal properties with friends. (Of course, this isn't the case for every boy or girl; favorite features vary greatly with personal taste, gender aside.) Everyone -- kids of both genders – really enjoys exploring the game world and taming/playing with pets."

Who plays? As a brand-new game, LEGO Universe's playerbase is still forming. "Technically speaking, the game is appropriate for players 10+, but LEGO Universe offers a wide array of activities and features that appeal to all ages -- including slightly younger audiences, all the way up to adults and hardcore gamers," Seabury notes.

What playstyles does the game most suit? While LEGO Universe offers traditional MMO gameplay, it's also designed to be lightweight enough for kids to take in bite-sized chunks. Players aren't locked into lengthy quests or encounters, so it's easy to hop back and forth between questing, participating in minigames, building some new features for your property, hanging out, and chatting with friends. The LEGO Universe definitely sets a kid-friendly pace.

How does the game address kids' internet safety? LEGO Universe is rated E10+ by the ESRB.

A Best Friends feature allows you to chat unmoderated with other players you know personally (the connection has to be coordinated offline, outside the game, making this a way to safely connect with real-life friends and family); otherwise all chat is moderated 24/7 by game staff. In fact, this moderation is part of the storyline itself. "In game, our moderators can show up as Mythrans, a mysterious race of Minifigures with a history of protecting and doing good deeds for others," Seabury explains. "They constantly keep a watchful eye on players when they communicate together via the chat system, or when they build and bring their creations to life on their properties."

Chat is regulated through the use of white and black lists, which define what you can and cannot say when chatting with other players. LEGO Universe also uses a proprietary mechanism to do analysis of utterances over time, Seabury explains. "The result of this analysis is a score that is monitored," he says. "Those players whose scores exceed a specified threshold can be warned, muted, or even banned from the game."

Parents can set playtimes for thier kids and approve Best Friends requests, which lets kids communicate more openly with their real-life friends than with other players.

What kid-friendly features keep children moving through the content? The LEGO Universe user interface definitely shows kid-friendly touches: colors are bright, explanations are simple and complete, and on-screen text is a little larger than text in typical MMOs. Players can choose between control systems such as using the keyboard and mouse or configurable key maps.

In terms of content, variety is the spice of these young players' lives. "The varied environments give kids a choice of places to explore and play, whether they want to explore deep into more battle-heavy, 'darker' areas, or stay in safer locations to chat with friends, play minigames or complete less 'scary' missions," Seabury explains. "The characters and creatures are all colorful, funny, relatable and appropriate for kids of all ages. Collectible items give younger (and older) players ongoing goals to strive toward between missions -- rewards are positive reinforcement that inspire and foster creativity, critical thinking and planning (i.e., gathering the right bricks/models, and figuring out how to use the items you've collected/earned to build and program your wildest creations, and show them off for everyone to see). Pretty cool!"

What's the social atmosphere? A safe, kid-friendly community is high on LEGO Universe's list of priorities. We expect the same game-focused, happy young chatter we heard during beta to persist as the community solidifies in the live game.

What can players do outside the game? The tie-in to items outside the game is obvious: it's LEGO, folks. Motivated young players can connect with an active fan community involved in player forums, creation challenges and more. There are plans to allow players to purchase physical versions of their LEGO Universe minifigure avatars (and potentially other creations they build in game) – how cool is that?

Still looking for more details? Read our article on all the different ways you can evaluate kids' games, or visit MMO Family's Parents Guide to Kids & Family Gaming.

When it's time to find just the right game for your family, turn to MMO Family's growing Parents Guide to Kids & Family Gaming. Drop me a line with your thoughts, suggestions, family game experiences, and questions about gaming and parenting at lisa@massively.com.

In this article: children, family, family-gaming, featured, kid-friendly, kids, lego, lego-universe, legos, mmo-family, net-devil, netdevil, parental-controls, parents, parents-guide, parents-guide-to-kids-and-family-gaming, ryan-seabury, subscription, warner-brothers-interactive
All products recommended by Engadget are selected by our editorial team, independent of our parent company. Some of our stories include affiliate links. If you buy something through one of these links, we may earn an affiliate commission.
Share
Tweet
Share