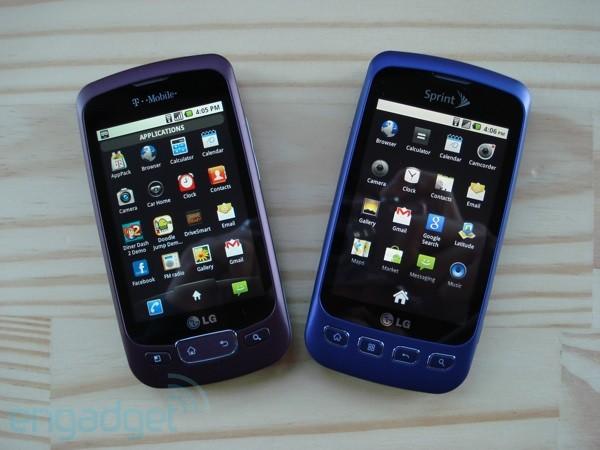 It wasn't long ago that buying a smartphone meant spending at least a Benjamin and committing to an expensive 2-year contract. But things are changing, and shopping for a smartphone on a budget is getting easier than ever, thanks in great part to a recent flood of reasonably-priced Android devices that are pouring into the market. We've already talked about the HTC Wildfire, Huawei Ascent, ZTE Racer and Blade/San Francisco, and the Motorola Citrus -- not to mention the lovely Comet (and its international cousin, the Ideos) on T-Mobile. Enter the LG Optimus T ($30 post-rebate on T-Mobile) and Optimus S ($50 post-rebate on Sprint), two Android siblings that might prove once and for all that "affordable" doesn't mean "cheap." Let's dig in. At a glance, the Optimus T and Optimus S look attractive if not somewhat generic. Our review units came in a lovely shade of burgundy (T-Mobile) and purple (Sprint), but each is also available in black. Both devices feel solid and comfortable in hand. Build quality is excellent, and the abundance of soft-touch plastics remind us of Sprint's HTC Hero. LG rightfully opted for physical buttons all around, and added a smattering of tasteful chrome / silver hard plastic accents. The 3.2-inch 480 x 320 pixel TFT LCD is bright, with vibrant colors and decent viewing angles. The capacitive touchscreen is responsive, but we're still debating the material -- likely glass but possibly high-grade plastic. There's a 3.5mm headphone jack and power / lock button on the top edge, a micro-USB connector and microphone hole on the bottom edge, and a volume rocker on the right edge of each phone. In back, a color-coordinated aluminum pod houses a 3.2 megapixel autofocus camera without flash.

While these devices share the same overall design and layout, there are some notable differences between them. On the Optimus T, the home and menu keys are swapped versus the Optimus S, for example, which uses the usual plain Android configuration. Sprint's Optimus adds a microSD slot on the left edge, a 2-stage camera button and voice dialing key on the right edge, and a dedicated speaker in back. T-Mobile's Optimus hides the microSD slot behind the battery cover (along with the SIM slot), and recycles the earpiece as the speaker. In both cases, the microSD slots are hot-swappable (a 2GB card is supplied), and the speakers are adequately loud and clear, even though the double-duty earpiece on the Optimus T sounded slightly better to us. Interestingly, colors are warmer on the Optimus S display.

Under the hood you'll find a 600MHz Qualcomm MSM7627 with Adreno 200 graphics, 512MB of memory, WiFi b / g, Bluetooth 2.1, AGPS, a compass, and an accelerometer. These are pretty impressive specs for a budget phone, so we'll forgive LG for leaving out a light sensor. The Optimus T is the world traveler thanks to a GSM radio with quadband EDGE and dual band HSPA (1700 / 2100 MHz), while the Optimus S is more domestic, and only provides CDMA support with EVDO Rev. A. T-Mobile's model also includes an FM radio and WiFi calling support, both of which are missing on Sprint's version. Both devices come equipped with a sizable 1500mAh battery, which resulted in 2 happy days of moderate picture snapping, music listening, web browsing, and messaging with WiFi / AGPS on, Bluetooth off, and multiple Gmail accounts configured. We didn't have any issue with reception or call quality.

Cameras on budget phones are often abysmal, but fortunately, that's not the case with these. Both devices feature the same 3.2 megapixel autofocus camera with macro and VGA video recording, but without flash. The resulting pictures are pretty nice, especially in good light. Colors are a bit muted, but exposure is handled well. Low-light performance is surprisingly decent, and noise is kept under control at the expense of some detail. Video recording is somewhat jerky (we measured 17fps), but otherwise adequate. Although T-Mobile's Optimus lacks the dedicated 2-stage camera button present on Sprint's version, it compensates by replacing the default Android camera application with LG's excellent camera interface. This provides additional settings such as scene modes, smile detection, and ISO, as well as a clever on-screen shutter key (hold to focus, then release to take the shot). The icing on the cake is that the Optimus T captures better quality audio than the Optimus S. The Optimus T and Optimus S dish out a tasty serving of vanilla Froyo, each lightly sprinkled with a unique combination of toppings. In both cases you'll experience the complete Froyo goodness, including WiFi hotspot functionality (albeit subject to carrier provisioning and pricing). All the usual applications are present, including Gmail, Latitude, Maps, Places, Search, Talk, and so on. Unfortunately, this also includes Android's lackluster music player. Performance-wise, the UI is responsive and everything feels quite snappy, as you'd expect from a pair of modern phones running plain Android 2.2. The web browser handles large sites like Engadget without fuss -- albeit without Flash, since it's not (yet) available for these devices. But we're most impressed with how the Optimus T and Optimus S fared in the Quadrant benchmark, scoring higher than the Droid.

T-Mobile's Optimus tweaks the default UI somewhat, but manages to avoid souring the original flavor. The notification area gains a row of toggles for WiFi, Bluetooth, GPS, data, and mute, while the app tray groups pre-installed applications on top and downloaded applications below. Strangely, holding down the app tray button doesn't bring up any home screen thumbnails. T-Mobile chose to replace some of the standard Android widgets (such as the clock and calendar) with custom, HTC Sense-like widgets (some better, some worse). As we've already mentioned in the camera section, T-Mobile also wisely chose LG's camera interface. A few game demos come pre-installed, along with T-Mobile's App Pack -- a carrier-sanctioned subset of the Android Market that we've seen on other phones from the carrier in the past -- and Swype, which is the default keyboard upon first power-on. You'll also find TeleNav bundled, but no sign of the Facebook and Twitter apps. T-Mobile's add-ons include DriveSmart: when manually enabled, this app minimizes driving distractions by silencing notifications, routing calls to voicemail or a Bluetooth headset, and optionally auto-responding to calls and texts. DriveSmart Plus, a downloadable upgrade, automatically detects vehicle motion, and adds parental controls.

Sprint's Optimus keeps the original dessert almost uncontaminated. What is normally the browser button to the right of the app tray button is replaced with a Sprint ID button. Sprint ID, which you'll remember from our Samsung Transform review, bundles wallpapers, shortcuts, widgets, applications, and ringtones into themed packages available for download from Sprint. While possibly helpful to first-time users, it seems like a waste of valuable home screen real-estate to seasoned Android freaks like us. Oddly, Google's Car Home application is missing, but thankfully, Sprint pre-loads the Facebook and Twitter apps.

There's absolutely no doubt that the Optimus T and Optimus S offer incredible value. With nice hardware, up-to-date software, and most importantly, solid performance, there's a lot to like for both first-time Android users and smartphone aficionados on a budget. T-Mobile's version seems to be the winner here, with a lower price, a better camera implementation, useful extras (FM radio and WiFi calling) and wordwide roaming, but we're also madly in love with the purple finish on Sprint's model -- so it's a tough call. No matter which one you end up picking, the Optimus T and Optimus S paint the same picture the Comet did: the days of the dumbphone and feature phone are numbered. In our book, that's a good thing.
In this article: android, Android 2.2, Android2.2, AWS, DriveSmart, Froyo, google, lg, mobile, optimus s, optimus t, OptimusS, OptimusT, review, sprint, t-mobile
All products recommended by Engadget are selected by our editorial team, independent of our parent company. Some of our stories include affiliate links. If you buy something through one of these links, we may earn an affiliate commission.
Share
Tweet
Share