T. Stevens
November 15th, 2010
In this article: art, drawing, feature, featured, features, gametablet, nintendo, review, stylus, tablet, thq, udraw, udraw gametablet, UdrawGametablet, video, wii, wii remote, wiimote, WiiRemote
There comes a time when fiddly buttons and D-pads just don't do it anymore, a time when you need a little more control. Nintendo was first of the current generation to show its hand with the fling-sensitive Wiimote, and of course Sony and Microsoft are both now doing similarly intended things with the PlayStation Move and the Kinect, respectively. Now THQ is trying to do its own little new thing by launching the $69.99 uDraw Gametablet on the Wii, supplanting the wavy wand with a stylus. Next logical step in gaming? Tool to unleash a torrent of creativity? Half-baked third-party accessory? Read on to find out.
%Gallery-107435%
THQ 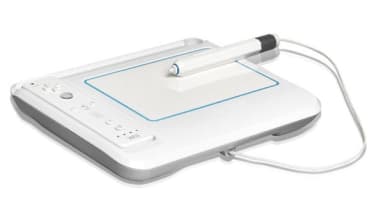 
First impressions of the uDraw Gametablet are that it's, well, rather chubby, but falls to hand nicely. It's maybe a half-inch thicker than a standard Wii Remote, one of which gets slotted into the left. That's how the tablet connects to the console itself, and rather nicely doesn't require any batteries of its own. A short cable clips in the Nunchuck port, wedge the Wiimote in the slot, and you're good to go.

The tablet is also fairly hefty, which is odd considering there can't be much circuitry in here, but despite obviously being a third-party add-on it feels decidedly first-party. Nothing creaks, nothing squeaks, and the plastics all feel reasonably high-end, including the fat stylus that pops in the bottom and looks like a futuristic pencil for stubby fingers, a silver ring where the eraser should be, a two-way button toward the pressure-sensitive tip, and a short tether keeping it from disappearing.

Not everything is first-class, though. For one thing, there's no hole on the top of the tablet to let the Wii Remote's IR sensor peer through. Since you can't use the uDraw outside of supported games you'll need to pop the Remote out, interact with any system menus, then pop it back in again. Also, as you can see the Remote wedges in on the left side, with the intention that you draw on the 4 x 6-inch pad on the right. It would have been a minor design alteration to allow the Remote to slot in either way, but as-is that's not possible.


The uDraw Gametablet comes bundled with a title called uDraw Studio, which is a sort of Wii-ified, super-simplified version of Corel Painter. No, you won't be mixing virtual paints on a digital canvas here to create amazing effects, but you do have a selection of media at your disposal, including naturally a paintbrush, chalk, pencil, a pen, charcoal, an airbrush, and that's about it. You can specify the size of each individually, choose from hundreds of color palettes or create your own, and use a rubber stamp to place fish silhouettes just so.

Putting stylus to plastic results in a somewhat unpleasant sensation at first. The 4 x 6 drawing surface is smooth plastic and the plastic nub drags a bit, like the feeling of a little stylus on a resistive touchscreen with a cheap screen protector slapped on it -- probably with a few too many bits of dust trapped beneath. Naturally there's no dust trapped here, but the feel is similar, and it's not particularly good.

Not particularly precise, either, but ultimately as a tool for kids to make cool pictures it works well enough -- and good enough for us to make our own cool pictures that only look like they were made by kids. Pressure-sensitivity is here, though you annoyingly have to go into a menu and enable it with every tool selection. In fact you have to go in the menu and toggle a lot of things. Sure it's only a button press away, but it'd be nice if you could custom-assign specific tools to the Wiimote inputs. As it is 1 always loads the eraser and 2 always the bucket fill -- because, you know, the bucket is widely regarded to be the most often-used tool of real artists.


We made a few simple sketches, including a lovely chalk rendition of Kirby, exported to SD card via the game, which supports JPEG or "high quality" PNG. (The latter equates to a curious and decidedly non-high resolution of 576 x 396, complete with annoying uDraw watermark on there.) Sure, we're no David Kassan, but then neither did we go to art school. And, unfortunately unlike Nintendo's Art Academy on the DS, there are no tutorials here to help us actually get better at drawing things.
%Gallery-107437%

Two other launch titles are available with the uDraw at a budget-friendly $30 each:
%Gallery-107436%

Neither of these is exactly a system seller as it were, and of course the big question is how many more uDraw games are coming in the future.

The uDraw may not be the most powerful artistic creation on the planet, but in the right hands it can be a lot of fun. Really, though, those hands need to be right-dominant and attached to a youthful (or youthful-minded) individual for it to be worth the purchase. If you have a young relative who is showing signs of creativity but who you don't trust running around the house with art supplies, or one who can't be bothered to pay any attention to anything without a game controller involved, this could be their perfect gateway drug onto some powerful artistic stuff, man. But, if you're a bit older, a bit more mature, have a computer, you should skip this and go straight for something a little more serious -- a similarly priced Wacom Bamboo would probably do you nicely.
All products recommended by Engadget are selected by our editorial team, independent of our parent company. Some of our stories include affiliate links. If you buy something through one of these links, we may earn an affiliate commission.