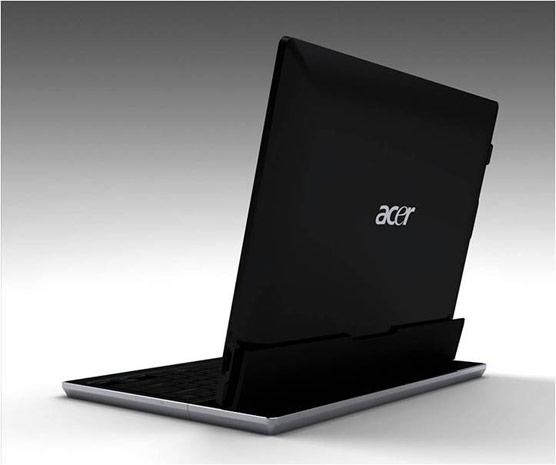 Whoa, what's this? Tucked between a fresh-out-of-the-oven Android tablets is a new 10.1-inch Windows 7 tablet from Acer, and it looks as if this fellow will be gracing store shelves long before its Google-based brethren. Boasting an ebony motif and more gloss than a man could ever know what to do with, this (also unnamed) device will measure 15mm thick and weigh under 2.2 pounds, and while we're still left to wonder about the screen resolution, HDD size or memory amount, we are told that it'll use AMD silicon. It's not often you find an AMD-based tablet, so we're more than eager to get our paws around this thing and see how it compares to Qualcomm / Intel-powered alternatives. And judging by this image above, Acer is planning a docking solution in order to make it more useful at home -- an idea we saw revealed at Computex with ASUS' Eee Pad. Other tidbits include a pair of 1.3 megapixel cameras (one rear, one front-facing), inbuilt WiFi and 3G and February 2011 ship date. Now, if only we had a price to pore over... 10.1" Windows Tablet: Versatility in a tablet form factor
Acer's range of tablets also includes a 10.1-inch device offering an extremely innovative solution that combines touch screen user-friendliness with the comfortable experience of a physical keyboard. In fact, the tablet comes with a docking device that includes a full-size keyboard and more connectivity options to enhance the user experience.

Thanks to this simple solution, this tablet will provide optimal ergonomics and ease of use both on the go and at your desk. Thin and light (only 15 mm and less than 1kg), and with a 10.1", high resolution display, it's easy to carry around and really unobtrusive. This tablet ensures outstanding entertainment and a superior touch experience.

The tablet will run on the next-generation AMD platform and will be equipped with two 1.3MP cameras, one rear and one front-facing, allowing you to take pictures, record video, chat and videoconference. Wi-Fi and 3G connectivity lets you keep in touch with your world at all times.

Technological developments are changing the way we interact with devices. No longer a single product but a multitude of instruments with diverse form factors and display sizes designed to meet the specific connection need of that particular moment, allowing the digital individual to stay connected and interact with his world, anytime, anywhere.

Social networks, music, email, instant messages, photos, videos, chat and the web have become essential in everyday life. The content we produce, and the availability and accessibility to it at all times is what drives us towards new instruments.

Interaction, connecting, sharing and mobility. Welcome to the Acer tablet.

In this article: 10.1-inch, acer, amd, breaking news, BreakingNews, microsoft, slate, tablet, tablet pc, TabletPc, windows, windows 7, windows 7 tablet, Windows7, Windows7Tablet
All products recommended by Engadget are selected by our editorial team, independent of our parent company. Some of our stories include affiliate links. If you buy something through one of these links, we may earn an affiliate commission.
Share
Tweet
Share