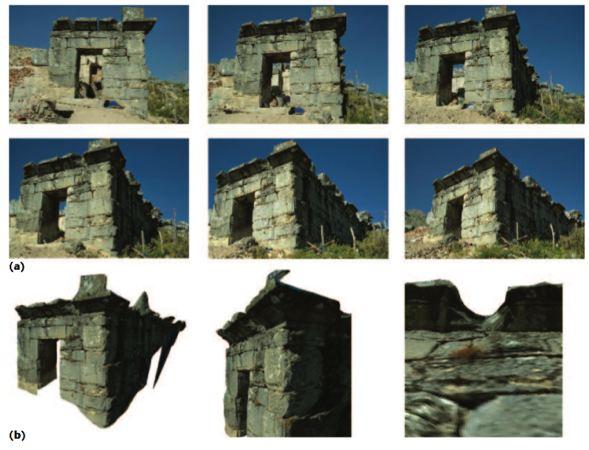 A group of researchers from the University of North Carolina and the Swiss university ETH-Zurich have teamed up to develop a system for creating 3D models of famous landmarks using photos from photo sharing websites like Flickr. Unlike previous projects at Microsoft and the University of Washington, the team at UNC used a home PC (albeit one with four GPUs) to process millions of images pulled from the Internet and construct 3D models of such landmarks as the Colosseum and the Roman baths at Sagalassos (above). And all the models were created in less than a day. According to UNC Chapel Hill's Jan-Michael Frahm, the process improves on current commercial systems by a factor of 1,000 to one. "Our technique would be the equivalent of processing a stack of photos as high as the 828-meter Dubai Towers, using a single PC, versus the next best technique, which is the equivalent of processing a stack of photos 42 meters tall – as high as the ceiling of Notre Dame – using 62 PCs," he said. "This efficiency is essential if one is to fully utilize the billions of user-provided images continuously being uploaded to the Internet." He sees any number of uses for this technology, from AR integration to 3D maps for rescuers in case of a natural disaster.
In this article: 3d, 3d imaging, 3d modeling, 3dImaging, 3dModeling, ar, augmented reality, AugmentedReality, flickr, images, imaging, map, maps, photos, rome, unc chapel hill, UncChapelHill, university of north carolina, University of North Carolina-Chapel Hill, UniversityOfNorthCarolina, UniversityOfNorthCarolina-chapelHill
All products recommended by Engadget are selected by our editorial team, independent of our parent company. Some of our stories include affiliate links. If you buy something through one of these links, we may earn an affiliate commission.
Share
Tweet
Share