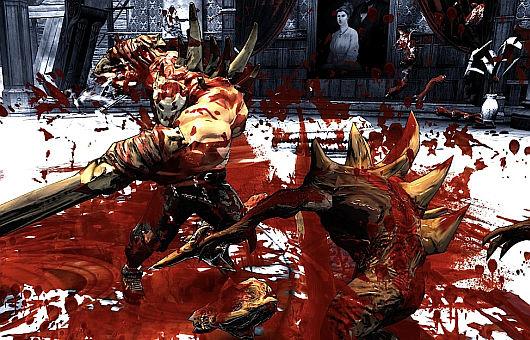 If there's one thing Splatterhouse isn't, it's precise. It seems to take pride in being sloppy as it revels in letting you lop off limbs, crush skulls, and tear ribcages from spines.Unfortunately, thanks to that same sloppy attitude, you might find yourself wishing the game could do the same to you, if only to end the suffering. 10
Just like the TurboGrafx-16 original, Splatterhouse places you in the role of Rick Taylor, a student who just wanted to propose to his girlfriend Jennifer at the Eclipse Festival when she gets kidnapped by Dr. West, a psychopath doctor of Necrobiology who is obsessed with bringing back his deceased wife by taking advantage of the impending solar eclipse and the powers of the Corrupted. After Rick is mortally wounded by one of Dr. West's minions, his wounds are healed by putting on the talking Terror Mask, which causes him to hulk out and go on a ten-hour marathon of monster mashing on his way to stop Dr. West and save the girl.

Okay. Whew. Glad we got that out of the way.

It's really all just a rather stupid set up for one thing: gore. And lots of it. The Terror Mask's abilities are fueled by blood, and it's not terribly picky about whose. Think Jim Carrey's The Mask but instead of goofy antics and magically produced airhorns, you've got excessive, pointless profanity and magically produced bone blades protruding from your arms. Oh, and the ability to crush skulls. All the time. Repeatedly. Over and over again. And then a couple more times. Until you fall asleep.

It seems that no one bothered to think that maybe a sloppy brawler wouldn't be terribly great at handling anything that needs even remotely precise movements.


Now, I realize that Splatterhouse is an entry into the beat-em-up genre, one known for repetitive action. But the five hundredth time you slam a Ghoul against the wall while the Mask yells "Paint the walls red," it's going to get slightly grating, no matter who you are.

Splatterhouse is stylish, gory, plays just fine (at least in the combat segments), and even has a decent stable of voice actors, but the excessive repetition of the "walk to room, kill all baddies, go to next room" game design revokes any cool points that the X-TREEM nature may have scored with fans of the style. Even the QTE-oriented "Splatter Kills" get rather tiresome after a while, even if you are literally tearing torsos and arms from their owners. It's all gore for the sake of gore, hiding the lack of substance deep beneath several feet of blood and intestines.

Just like in the original games, sprinkled among the more traditional combat segments come the occasional 2D platforming segment. At first, I was pleased to find something to break up the monotony of the combat, but once I happened on my first insta-death pit, I realized that boredom was much preferable to the controller-chucking annoyances of these particular hallways. Rick's movements aren't exactly pixel-perfect, leading to a lot of sliding off ledges, overcompensating into spinning blades, or being carried by a punch's momentum into a fountain of fire. It seems that no one bothered to think that maybe a sloppy brawler wouldn't be terribly great at handling anything that needs even remotely precise movements.

You didn't think we'd forget to include this gem, did you?
When you die (and due to the questionable controls, you will), be prepared to wait for a couple minutes before getting a shot at that tricky little gap again. The loading times are pretty lengthy, and the checkpoints tend to be placed minutes back from where you need to be, leading to playing the same easy segments over and over before getting your soul crushed by that damn gap that you missed before, by no fault of your own.

Splatterhouse is like an undercooked blood sausage. It's sloppy, gooey, and all falls apart under any real amount of pressure. If given a little bit more time on the grill, it could have turned out to be one of the tastiest dishes in the beat-em-up genre this year. But as it stands, it's just a cold lump of yuck.

This review is based on the Xbox 360 retail version of Splatterhouse provided by Namco Bandai.

Taylor Cocke is a Bay Area-based recent graduate from University of California Berkeley. After spending a couple years as the world's greatest lowly intern at Official Xbox Magazine, he has begun his life as a freelance games journalist.
In this article: BottleRocket, microsoft, Namco-Bandai, playstation, ps3, Splatterhouse, xbox
All products recommended by Engadget are selected by our editorial team, independent of our parent company. Some of our stories include affiliate links. If you buy something through one of these links, we may earn an affiliate commission.
Share
Tweet
Share