D. Murph
December 1st, 2010
In this article: cowon, cowon x7, CowonX7, iaudio, iaudio x7, IaudioX7, media player, MediaPlayer, pmp, portable media player, PortableMediaPlayer, review, touchscreen, x7
We figured Cowon's X7 wouldn't bother passing through the FCC's loose fingertips if it weren't planning on making a stateside debut at some point, and sure enough, the aforesaid media player is gearing up to ship here just two months after its South Korean reveal. Over the years, Cowon has managed to maintain a fairly decent cover in the US of A, but audio purists recognize the brand for its commitment to sound quality over all else. The X7 is a capacious (160GB) player with a fairly large display (4.3-inches) and a world-beating battery good for ten hours of video and up to 103 hours of audio. Yeah, a full long weekend's worth. As with anything in life, Cowon's made some sacrifices here as well; you won't find a WiFi module, but you will spot support for Bluetooth headsets. How's it all shake out? Join us after the break for our full review.
%Gallery-108509%
Cowon
0
SCORE
Engadget
N/A
Critics
1 review
80
Users - Not yet scored
N/A 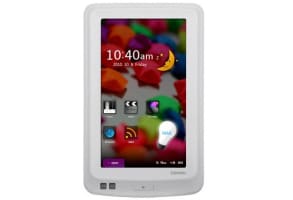 Just like the V5 and A3 that have preceded it, the X7 is classically styled. It's a no-frills design, with a matte black finish, simple curves and a beautiful fit / finish. It sits nicely in the hand, and while it's not the lightest PMP in existence at 0.46 pounds, it's definitely not as heavy as we expected given the large 160GB drive and presumably gargantuan battery arrangement within. In the past, we've found Cowon's portable media players to be delightful for video watching, and the same is the case here. The only bummer is the screen resolution; 480 x 272 may have cut it three years ago, but today, we've simply come to expect higher pixel counts. The image quality was great, however, as were viewing angles, but we couldn't help but yearn for something a touch more dense.

It also uses a resistive touchpanel rather than capacitive, but it's actually one of the most responsive we've ever toyed with. It works just fine with a stylus or with a finger tap, and unlike many resistive panels, we weren't forced to actually use our fingernails to make inputs. Swiping motions are supported, but multitouch gestures obviously aren't. We should also point out just how fond we are of the overriding UI; but then again, we're pretty into the Zune UI that Cowon has quite clearly taken a note from here. Unfortunately, things aren't as lust-worthy once you dig in. For one, there's no way to orient the UI horizontally; you're stuck in portrait mode for the vast majority of applications, like it or not. Furthermore, there's no clear and intuitive way to move around in your music library. Let's lay out an example: say you're listening to a particular song. The options beneath it are "Prev," "Next" and "Open." It's pretty obvious that the first two will jump forward or back a track in the playlist, but since when does "Open" mean "jump back to the track listing?" From there, you'll need to discover that "Top" actually means "go to the artist / genre / etc. selection screen." It's not impossible to get used to, but it's not setting the bar for user-friendliness, either.

As for actual performance? In a word, it's great. Jumping from music to videos to the notepad function was as snappy as ever, with next to no lag to speak of. In fact, the only hiccups we found were waiting for the drive to spin up a requested tune. Nothing longer than waiting for a Class 2 microSD card to find the same jam in our Nexus One, though. There's also an inbuilt FM tuner (which works sufficiently well), an audio recorder (which does likewise), as well as an image viewer, movie player and a utility drawer containing a calculator, notepad, stopwatch, etc. You'll also notice a "Browser" in the UI -- no need to get your hopes up, as there's no WiFi and no web browser onboard. It's simply an image browser, and a dream crusher.

We definitely dig the lower-left edge placement of the volume up / down buttons, and while minuscule, the "Menu" (i.e. "Home") button works as advertised. Outside of that, we've got a standard 3.5mm headphone jack on the bottom edge, a power / hold switch on the lower-right edge, an internal speaker right on the front (which works well for backseat viewing by two, by the way), a dedicated DC input port and a proprietary USB / AV cable outlet. That's a major downer -- you can't simply toss in a generic micro or mini-USB cable here and expect to load new content. You'll need to bring Cowon's included cable, or else prepare for a long night weeping into your pillow. We do appreciate how easy it is to simply drag media onto the drive after it mounts on your computer, but then again, we appreciate anything simpler that the abomination known as iTunes syncing.

The saving grace, as always, is the audio quality. Put simply, we're thinking you'll be hard-pressed to find a capacious PMP with sound quality that matches what we're hearing from the X7. Cowon's audio fidelity has never let us down, and nothing changes with the X7. It's simply the best audio experience out of a PMP, bar-none. The included "JetEffect" and BBE equalization patterns are simply world class. It's easy to sift through the laundry list of options, and we were able to find EQ tweaks that bettered just about every genre of music we tested. It's aural bliss, plain and simple.

Cowon's X7 is the definition of a mixed bag. The overall design is lovely, but the low screen resolution, quirky UI and use of a propriety connection cable dampens our excitement. That said, we looped a video for around nine hours before seeing any hints of exhaustion, leading us to believe that you may honestly get triple-digit battery life if sticking to audio alone. Having 160GB of onboard storage is also a godsend for album collectors, and the world-class audio quality will more than satisfy any budding audiophiles. (We should note that Cowon's shipping a 120GB version elsewhere in the world, but only the black 160GB unit in America.) In the end, this unit is little more than a multimedia player; there's no WiFi, no web browser, and no support for apps of any kind. If you're looking for that, there's a Zune HD or iPod touch waiting with your name on it. But if you're looking for something that's simply the best at being simple, the X7 is tough to beat.

As of now, the X7 has yet to go on sale in the United States, but Cowon swears that our unit is being followed by a flood of others that'll hit retail later this month. As stated above, the only model coming to the US is a black version with a 160GB hard drive. Cowon's never been one to compete solely on price (at least not in America), and that's not changing with the X7. Given the $319.99 retail price, the 160GB unit represents a ~$70 upcharge over the 160GB iPod classic -- a unit with a far smaller display, worse audio quality, fewer supported formats (the X7 handles MP3, WMA, FLAC, OGG, APE, and WAV) a battery that's not even half as good and a deadly requirement to use iTunes. Since it's tough to find any PMP with both 160GB+ of capacity and a penchant for running apps, the X7 looks like a far greater bargain than the V5 or S9. If you need boatloads of room on your PMP, and are willing to pay a premium for the best audio quality a set of human ears can get, keep your eyes on this JetMall newcomer.
All products recommended by Engadget are selected by our editorial team, independent of our parent company. Some of our stories include affiliate links. If you buy something through one of these links, we may earn an affiliate commission.