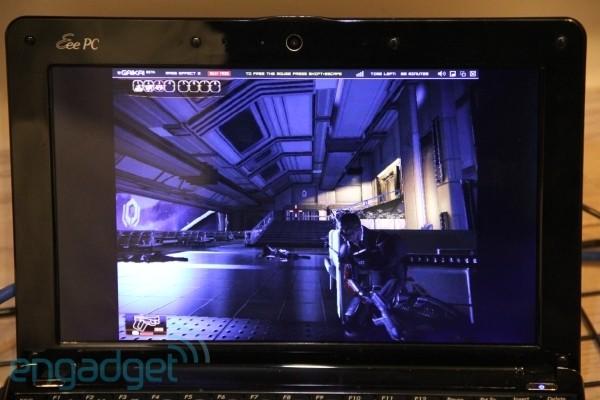 This is Mass Effect 2, running on a netbook -- a stock Eee PC -- with a single core Atom CPU that wouldn't dare to dream of actually processing the game. It works because the sci-fi opera's not taxing that silicon at all, but rather a beefy server miles away, streaming processed and compressed video frames direct to the 10.1-inch screen. It's called Gaikai, and if you're thinking it sounds just like OnLive by a different name, you'd be half-right. However, this streaming game service has a radically different business model which doesn't cost players a dime. Rather than provide a library of titles and charge you for on-demand, Gaikai will power game advertisements that let you actually play their games. If that sounds like an idea you'd like to hear more about, then we've got a treat for you. We spoke with founder David Perry about what the service can do, got an exclusive hands-on with the closed beta, and an extensive video walkthrough to boot. After the break, find the whole scoop.


Gaikai's very much in beta at the moment, and that extends all the way to its presentation. Right now the service is a dedicated website that inspects your internet connection, checks for Java and Flash, then lets you play... but Perry explained that couldn't be further from the way it'll look when complete. The idea is that Gaikai will let video game publishers secretly test your latency and bandwidth while you're browsing a website, and if it detects that you're on the cusp of a gaming purchase, it will act -- attracting your attention with a pop-up or animation that offers you a free trial of the software. Perry says you'll need about a 5Mbps connection to stream at 720p, but the latency requirements can be a bit more stringent. Publishers get to decide what latency makes for an acceptable session on a per-game basis, so you may need a server in the same neighborhood for fast-paced first-person-shooters.

If you accept, you'll be streaming the title nigh-instantly from Gaikai's servers and can play until the clock runs out (Mass Effect 2 gave us 90 minutes), but if you reject the offer or if your ping to a Gaikai facility was too high, the system files that statistical point away in a massive database so the company can decide where to put the next server, and / or modify the offer so that next time you're more likely to comply. Gaikai has twelve twenty-three data centers (There are twelve data centers in the US, and twenty-three worldwide - Ed.) at this point -- based all around the world -- so you may not qualify immediately when the service launches later this month. The idea is that if you don't, you won't even know, and thus won't be disappointed by rejection. If you do, however, it'll look something like this:

Turn on HD and click that "full screen" button for the best experience
Over an up-to-18 megabit AT&T U-Verse internet connection aimed at Gaikai beta servers roughly fifteen miles away, we generally got 10-15 megabits of download bandwidth, and a latency of between 25 and 35 milliseconds. That got us performance just about equal to the 720p video above, both in terms of visual quality and speed, and yet a noticeable amount of input lag -- not too much to make the game unplayable, but not nearly as enjoyable as on a dedicated console or gaming PC. There's a bit of video compression artifacting, especially around floating text, but it still made for a fairly pretty game -- imagine looking at a beautiful picture through a slight haze. If we were to compare against what we've played of OnLive (which also presently delivers 720p images over a variable-bandwidth stream) we'd say the visuals were roughly the same, but OnLive seemed to perform more antialiasing to soften sharp edges and had slightly more responsive controls. Controlling our protagonist through a few firefights, we found it difficult to reliably score headshots on the robot armies as our targeting reticle didn't move quite as precisely as our mouse, but we still got through the opening level without too much trouble.

You'll notice we're making a few excuses for Gaikai here, but the truth of the matter is this: the entire time we were playing, we wished we were running the game on our home console or beefy gaming PC instead. Which, if you think about it, is kind of the whole point. We asked David Perry about our experience, and he turned right around and asked if our session was fun -- and if we thought we'd experienced enough to figure out if the game was worth buying. We had to concede that yes, we'd had a fairly stellar demonstration of what the game was like, without having to spend a single minute downloading packages of texture files -- and that's a tremendous improvement over, say, watching a YouTube video of a game before making a purchasing choice.

However, that doesn't mean that Gaikai isn't planning to improve the service to the point where it can support full game sessions later on -- Perry said he'd like to offer that as an option to publishers alongside 1080p streaming and stereoscopic 3D when more servers roll out, and both processing power and bandwidth increase. For now, however, he's focused on improving latency and fixing last-minute bugs before a tentative mid-December launch, and sorting through the games to figure out which ones are worth hosting.

In October, Gaikai publicly announced that it had all the major game publishers signed on, but one of the most interesting things Perry told us was that he's actually spending more time these days turning games away. "We will not be putting 60, 100, 250 games on Gaikai," he told us, saying that rather than ramp up to a service full of titles, the objective is to only demo games that gamers will want to keep playing: "You're ninety-eight percent there and you just need to touch it -- those are the ones."

Obviously Gaikai wants to make a splash with quality titles, but the reasoning goes further than that -- if gamers play a demo through the service and decide the title's not for them, that game's publisher ends up paying for a negative outcome. Perry wants to steer individuals towards games that are guaranteed buys when and if tried, making the one-cent-per-minute flat rate Gaikai charges completely worthwhile. If you quit playing immediately publishers don't pay a dime, but if you get engrossed in the title, then you're likely to buy it, right? Perry says he's sitting on about 20 high profile titles right now, but won't launch all of them at once, and that we shouldn't necessarily expect them to all be games. The instant demo model also makes sense for big budget commercial software -- imagine if you could try a new video editing suite online, for instance. Perry wouldn't tell us which programs we could expect, but that Gaikai had access to all the "key franchises" of Electronic Arts, and intends to unveil one brand each week after the service is launched. That's slated to happen December 15th, though Perry didn't make any promises. We'll be waiting, watching and hoping our bandwidth is adequate in the days and possibly weeks to come.
In this article: advertising, beta, David Perry, DavidPerry, demo, exclusive, Gaikai, game streaming, GameStreaming, hands-on, instant streaming, InstantStreaming, marketing, Mass Effect, mass effect 2, MassEffect, MassEffect2, service, streaming, streaming games, StreamingGames, trial, video
All products recommended by Engadget are selected by our editorial team, independent of our parent company. Some of our stories include affiliate links. If you buy something through one of these links, we may earn an affiliate commission.
Share
Tweet
Share