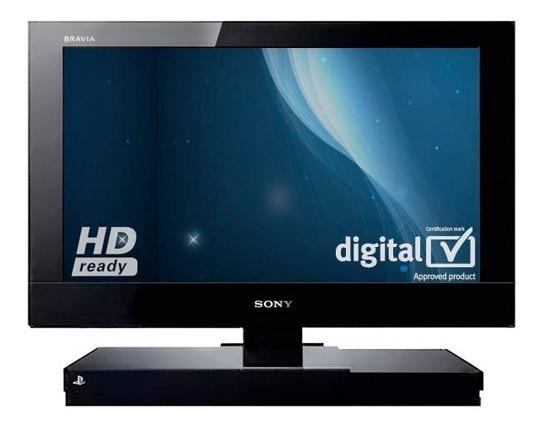 Sure, the PS3 is what's hip and happening for Sony game fans, but unless you picked up one of the first generation (chubby) units you have questionable support for the greatest generation of games: those that released for the PS2. But, don't fret noble gamer, and don't lament about trading that console in for $15 store credit a few years back. Just buy a new TV! Sony's KDL-22PX300 LCD has a rather hunky base that conceals a fully working PlayStation 2. That console is fully backwards compatible with O.G. PlayStation games and naturally also plays DVDs but, if that isn't enough pixels for you, four HDMI ports await the clumsy probes of cables from sources that can better handle the ways of its 720p panel. The set can also serve up video from Sony's Bravia service over Ethernet or an optional wireless dongle. It's priced at £200 in the UK, which is just a tick over $300 and, honestly, not too bad a deal. No word on an American release, but it'll need a SCART-ectomy before that happens.
In this article: 22-inch, 720p, bravia, kdl-22px300, lcd, playstation, playstation 2, Playstation2, ps2, sony
All products recommended by Engadget are selected by our editorial team, independent of our parent company. Some of our stories include affiliate links. If you buy something through one of these links, we may earn an affiliate commission.
Share
Tweet
Share