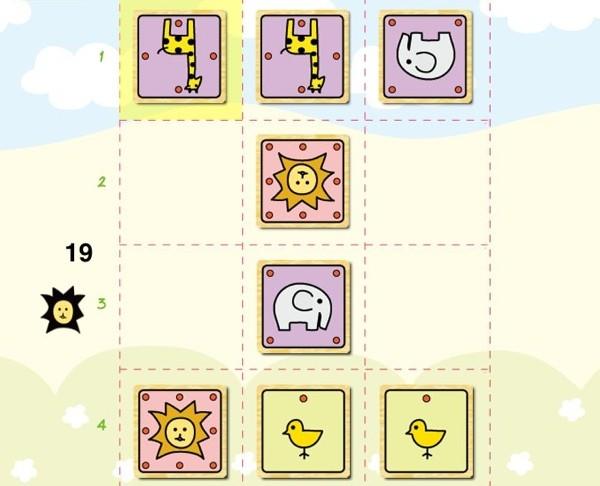 The new Let's Catch The Lion! board game app looks cute as all get out, and to be fair, it is designed as a kids' game. But this Shogi (Japanese Chess) variant is a worthwhile download from the App Store even for board gamers who don't have a child in the house. It's a solid two-player strategy game and should interest anyone who likes abstracts.

Doubutsu Shogi (which is Japanese for Animal Chess) was designed by the professional Shogi player Maiko Fujita, who wanted to get more girls interested in playing the original game. She found a great balance between strategy and fun in a small package, and the translation to iDevices lost absolutely nothing. How could it, given the tabletop game's incredible simplicity? Read on to get the full story. To start the game, each player has four different types of pieces. Instead of the kanji characters that adorn Shogi pieces, the tokens in Let's Catch The Lion! are differentiated by cartoon animals: a chick, a giraffe, an elephant and, of course, the lion.

Each piece moves in a different manner, but you don't need to memorize any rules, since each piece has red dots on the sides and corners where they can make a move. The chick (pawn) can only move forward. The good news is that if it makes it to the end of the board, it is promoted to the hen. All pieces can only move one space per turn, but aside from this, they share their movement patterns with chess pieces. The giraffe moves like a rook, while the elephant is like a bishop. The lion is, unsurprisingly, the king. The hen doesn't have a chess parallel, but it can basically move in any direction except diagonally backwards.

The goal of the game is to either capture your opponent's lion or to move your lion all the way across the board without placing him in check. In fact, you can never place your lion in check, and that's not easy to do on the tiny board (just three by four squares).

The rules to Dobutsu Shogi are pretty standard for a two-player abstract game. Each turn, you can move one of your pieces. But an interesting twist to the game is that you can put pieces you've captured from your opponent back into play on any unoccupied square. On the small playing space, this sort of power swing can have a huge impact on the game. Yes, you can put a piece into play that can capture the opponent's lion.

The game is also available as a tabletop version with graphics that are the same as those in the app, and that was a big hit at the 2009 Essen Game Fair.

There are two flavors of the app, a US$0.99 standard version and a $2.99 DX (Deluxe) version (Version 1.2 reviewed here) with a better AI and more features. Both are universal applications, but the standard version should only be purchased by someone who only expects a kid to play with the app and doesn't want to challenge said child very much with tough computer opponents. If you're always going to be playing human-to-human, then the $1 version is just fine. The DX version also has sound effects and features an "Expert CPU" challenge. I'm not 100 percent sure what you can unlock, but the description says, "Only in beating the Expert CPU, you will be praised as Lion, the King of Beasts!" and "Secret mode which would become playable after playing the game with 50 unique users." So, that's something.

Both versions offer very easy gameplay. For example, once you touch the piece you want to move, all of the squares that it can move to turn a delightful yellow color. There is also an undo button (yay!) and three levels of AI. The game has had many updates already, as you can see by reading this discussion thread.

One feature that we found to be somewhat mysterious is the Peer-to-Peer mode. Tapping it on the main screen brings up an "opponent list," but no explanation of how to set up people to play against. Anyone have an idea how this works?

One thing we can say is that the game works well for kids. If they enjoy checkers, then Let's Catch The Lion! is an easy next step before chess or other, more complicated games. The cute graphics only add to the kid-friendly vibe. We'd like a skin to make the game look a little more grown-up, but maybe we should also just not worry about others seeing us play a kids' game on a high-end digital device.

Check out a video explanation/review of the app and the tabletop game below. Alternately, if you have Zillions of Games installed, you can get the Dobutsu Shogi file for that here.

In this article: animal chess, App Review, board games, doubutsu shogi, gaming, iPad, iPhone, lets catch the lion, Madoka Kitao
All products recommended by Engadget are selected by our editorial team, independent of our parent company. Some of our stories include affiliate links. If you buy something through one of these links, we may earn an affiliate commission.
Share
Tweet
Share