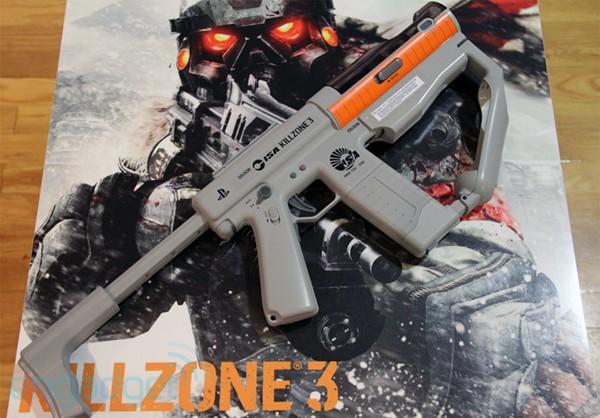 This isn't the first PlayStation Move peripheral to replicate a firearm, but the Sharpshooter is brought to you by Sony itself, so you expect a higher degree of quality than from the third-party deluge. And if you're the sort who like to accessorize, it's a pretty good offering. We had a chance to check it out this morning over a brief round of Killzone 3, which Sony says was the inspiration (along with the upcoming SOCOM). Overall, it's pretty light and sturdy. The Move controller slides into the front, and the buttons then become mapped around the gun: RL is under the grip, the Move button is just under the trigger, start and select rest on opposite sides of the barrel, and Square / Triangle are mirrored above the trigger, making it easier to reach regardless whether you're right- or left-handed. There's a cradle under the stock for the Navigation Controller to rest, the butt is adjustable, and the top has a mount for a scope (no details on that peripheral of a peripheral). There's additionally a lock button and what seems like burst-fire mode that won't be used by Killzone 3; the reps told us they spoke with various other developers to make sure the accessory fit their needs as well but couldn't elaborate more.

So, how did it handle? We'll say the buttons were all easy to get to, but this accessory is fundamentally not for us. Having to move the entire submachine gun (or your whole body, as it were) to aim felt more unwieldy than simply twisting a wrist like you would with the first-party Shooting attachment (or the Move controller by its lonesome). Speaking of which, the Sharpshooter is lacking in retro aesthetic, something we really liked in the "1950s laser pistol" replica that came out last month. We get the feeling this wasn't made with us in mind, anyway. Sharpshooter should hit store shelves in February (same month as Killzone 3) for a penny under $40. Looking for something more traditional? A jungle green DualShock 3 is also coming in February for $55. Press release after the break. December 9, 2010 – Sony Computer Entertainment America LLC (SCEA) today announced that the official sharp shooter attachment for PlayStation®Move will be available for $39.99 (MSRP) at major retailers nationwide this coming February 2011, concurrent with the highly anticipated Killzone®3.The PlayStation Move sharp shooter provides the most intuitive and immersive control experience for shooter games and will be compatible with already released titles such as Time Crisis: Razing Storm, upcoming AAA releases such as SOCOM 4: U.S. Navy SEALs and Dead Space Extraction, and many future PlayStation Move titles.

"PlayStation Move was designed with the goal of providing the most engaging and intuitive motion gaming experience possible, from a diverse range of genres," said John Koller, director, hardware marketing, SCEA. "We've already seen a tremendous response to PlayStation Move's launch lineup. With a heritage built on innovation and with a significant lineup of shooter and action titles on the horizon, we're truly evolving motion gaming with unmatched precision and a deeper sense of immersion than has ever been offered. When coupled with stereoscopic 3D support, such as in Killzone 3, the PlayStation Move sharp shooter represents a new step toward the ultimate goal of any cutting-edge video game: placing players directly in the game experience."

With a growing library of exciting titles and peripherals such as the PlayStation Move sharp shooter, gamers will be able to explore the precision and accuracy of PlayStation Move in ways that truly enhance the motion gaming experience.
In this article: ds3, dual shock 3, DualShock3, green, hands-on, jungle green, JungleGreen, kill zon, kill zone 3, KillZon, KillZone3, move, playstation, playstation 3, playstation move, playstation sharpshooter, Playstation3, PlaystationMove, PlaystationSharpshooter, ps, ps move, ps3, PsMove, sce, scea, sharp shooter, SharpShooter, sony
All products recommended by Engadget are selected by our editorial team, independent of our parent company. Some of our stories include affiliate links. If you buy something through one of these links, we may earn an affiliate commission.
Share
Tweet
Share