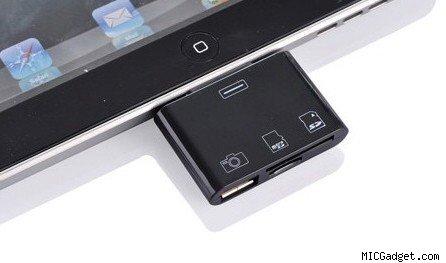 Here at TUAW, most of the bloggers are huge fans of devices featuring multiple levels of functionality jammed into one little box (this probably has something to do with a lifelong fascination with Swiss Army Knives.)

That's why there were smiles all around when M.I.C.Gadget, a blog that follows stories about gizmos that are, uh, Made In China, had a story about a new 3-in-1 iPad camera connection kit. As you know, the Apple equivalent sells for US$29 and is made up of two separate dongles. Two dongles = twice as much opportunity to lose one of them.

This little 3-in-1 kit features the USB port and SD card reader that make up the Apple connection kit, but there's one more thing -- a micro-SD card reader as well. Boom! But wait, there's more! The connection kit comes in black or white, which will be a nightmare for people who have problems making decisions.

Want to buy one? They're available for US$29.90 from the M.I.C. Gadget Store, but act now to avoid bitter disappointment. There are only 25 of the kits left in stock as of this morning...

In this article: accessories, camera connection kit, CameraConnectionKit, ipad, micro sd, MicroSd, sd card, SdCard, usb port, UsbPort
All products recommended by Engadget are selected by our editorial team, independent of our parent company. Some of our stories include affiliate links. If you buy something through one of these links, we may earn an affiliate commission.
Share
Tweet
Share