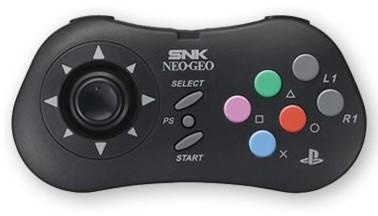 Oh man, as if having 10 Neo Geo classics hitting the PS3 and PSP complete with online multiplayer wasn't sweet enough, now SNK is doing one better by releasing an updated version of the classic Neo Geo gamepad. Sure, it isn't as majestic as the giant, hulking arcade stick that came in a pair with the $650 Neo Geo Gold System. However, the system's gamepad (released with the Neo Geo CD) would go on to be even more popular thanks to its much lower cost and novel floating 8-way d-pad. That controller is reborn (again) for the PS3 with USB connectivity the addition of a PS button in the middle, meaning you can even use it to pull up the XMB and taunt your friends into joining a King of Fighters match. Sadly this is only getting a release in Japan, where it sells for 3,129 yen (about $37), but Play-Asia will import you one for $45. Small price for such a lovely thing.
In this article: game controller, GameController, neo geo, neo geo cd, NeoGeo, NeoGeoCd, playstation 3, Playstation3, ps3, snk, usb, usb controller, UsbController
All products recommended by Engadget are selected by our editorial team, independent of our parent company. Some of our stories include affiliate links. If you buy something through one of these links, we may earn an affiliate commission.
Share
Tweet
Share