Peek killing off US email and Twitter devices after 'lifelong service' 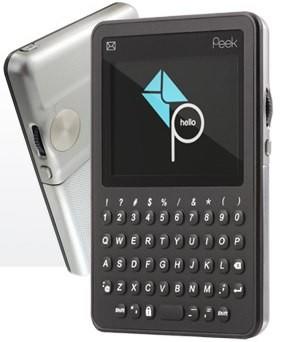 The overriding philosophy at Peek is "keep it simple," and we have to agree that as these things go, this is a pretty sound principle (even if we don't necessarily have much use for dedicated Twitter hardware). If the big payoff for the company isn't in the gadget-addicted states, it's been a good start: the company has sold some 50,000 units in two years while developing the back-end technology that CEO Amol Sarva believes can supply cheap, low-powered feature phones and other devices for emerging markets -- devices that could retail for as little as $50. "This is a huge opportunity for us," Sarva told GigaOm. "We've built technology that no one cared about but now we're suddenly being approached by guys who have the hardware that want to make it smart." And if that doesn't pan out, we have a suggestion: FourPeek, the dedicated Foursquare device.
In this article: amol sarva, AmolSarva, emerging markets, EmergingMarkets, feature phone, FeaturePhone, industry, peek
All products recommended by Engadget are selected by our editorial team, independent of our parent company. Some of our stories include affiliate links. If you buy something through one of these links, we may earn an affiliate commission.
Share
Tweet
Share