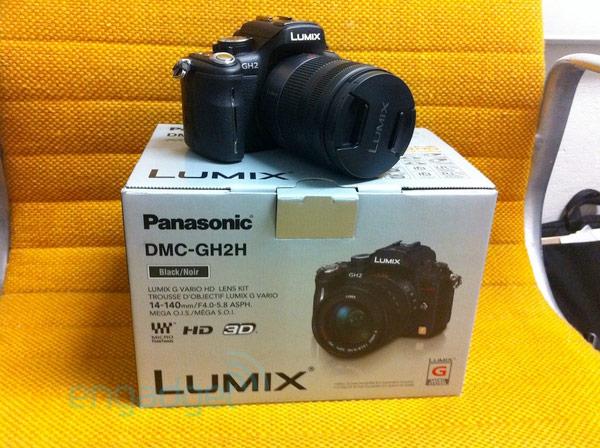 It's not exactly November, but those who pre-ordered early may still end up with a Lumix GH2 beneath their tree. The highly-anticipated GH1 followup -- which was introduced back at Photokina -- has officially begun to ship to end users in the US of A. The official order page shows a one to two week wait, but we've confirmed with Panny itself (as well as tipster Nate, the proud owner of the one above) that units are indeed trickling out as we speak. For those in need of a refresher, this Micro Four Thirds shooter packs a 16 megapixel sensor, 1080p movie mode, SDXC support and an ISO range from 160 to 12,800. Feel free to take a peek back at our hands-on from Germany, and make sure you cancel those holiday plans STAT -- wouldn't want this sitting on your doorstep for a solid week, now would you?

[Thanks, Nate]
In this article: camera, digicam, digital camera, DigitalCamera, dmc-gh2, gh2, lumix, lumix gh2, LumixGh2, MFT, micro four thirds, MicroFourThirds, now available, now shipping, NowAvailable, NowShipping, on sale, OnSale, panasonic, ship, shipping, ships
All products recommended by Engadget are selected by our editorial team, independent of our parent company. Some of our stories include affiliate links. If you buy something through one of these links, we may earn an affiliate commission.
Share
Tweet
Share